Now here's something: It's been three weeks more or less since my last post, and we've done something towards the shed every weekend....but each increment wasn't really worthy of an independent blog post, and, well...I've been busier than ever with work. So this post is a compilation of our recent-ish progress.

The is how the shed looked when we ambled out to the back yard the day after episode four, following a very adequate breakfast of French toast and non-shatterproof streaky bacon: 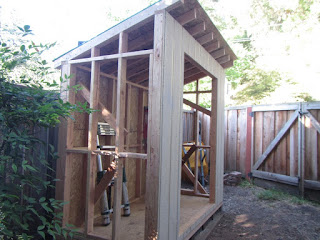 The first job was to install some tar paper over the roof sheeting we put down the day before. I put the "roof team" to work on that... 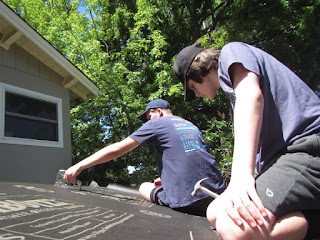 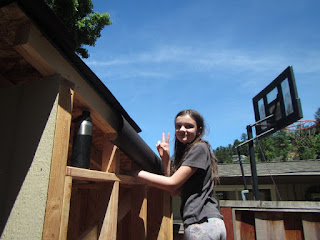 While the roof team was hard at it, Amy and I cut and installed the rest of the siding, although it's difficult to see that in the following picture: 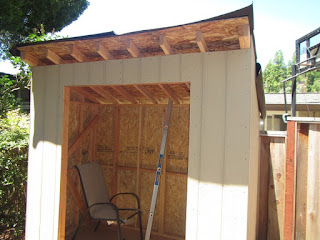 Before we went any further, the rafter tails at the front which will remain exposed to the elements needed priming: 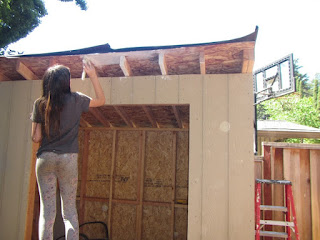 With the priming under control, I helped Samuel Sheep install the roof covering. We're using composition/asphalt shingles in slate gray if you're interested. Sam installed the shingles and I did the cutting and staple gun refilling. We actually used an electric-powered carpet tacker, which fires staples with a 3/16th crown, half the width of common staples - it wasn't the ideal tool, but Sam made it work. 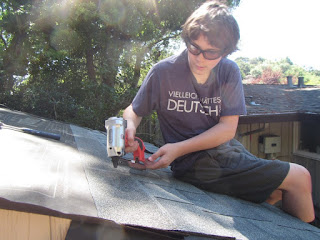 We were using shingles that were left over from patching around the skylight that we installed last Fall, and we ran out halfway through the roof: 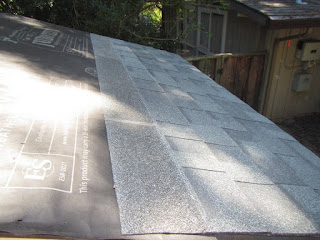 We did not run out of primer: 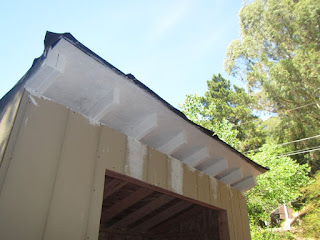 The next photo was taken almost two weeks later - fortunately we picked up some more shingles in the interim: 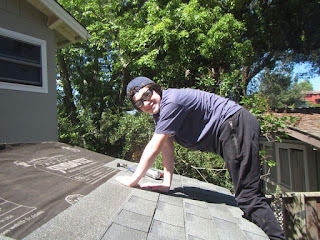 While Sam was working on the roof, Ruby Sheep got to work on priming the timber we'll be using to construct the doors: 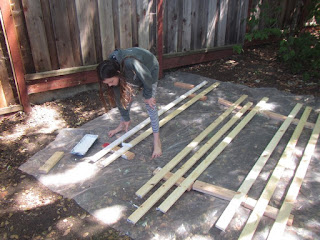 The priming was accompanied by the constant pop-pop-ping of the carpet tacker... 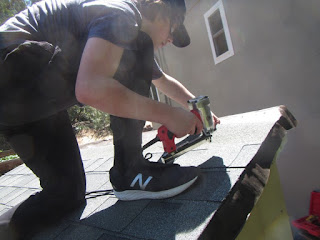 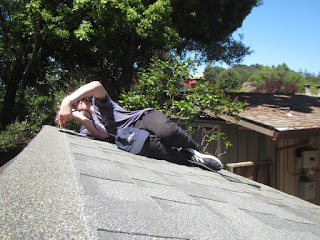 Quinn Sheep kept up with developments from a safe distance... 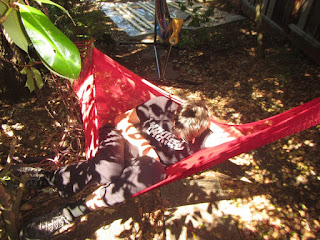 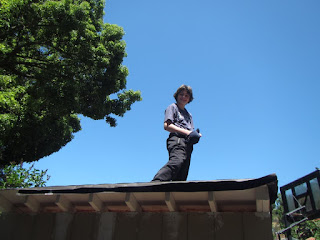 It came out just like a professionally installed roof: 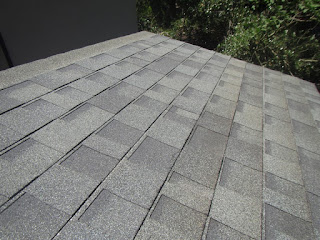 After that we had to break for Monopoly™ 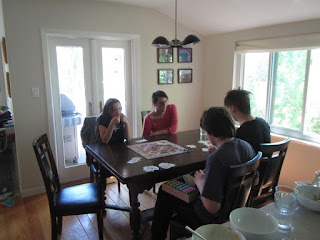 This weekend - the one that will end in about 30 minutes at the time of writing - it was just Amy and I plodding away. After a very adequate lie-in on Saturday we started chipping away at the custom doors. The siding at the front of the shed is made from two 8' x 4' foot panels. I trimmed about eighteen (18) inches off the top of the panels, and then cut out the space for the doors....well, the doors will be made from the cut out pieces. The siding material is 7/16 thick, so they need some beefing up.

The first step was to install a 1" x 3" pine board at the left side which the hinges will bolt into. We did our best to get this piece straight n' true: 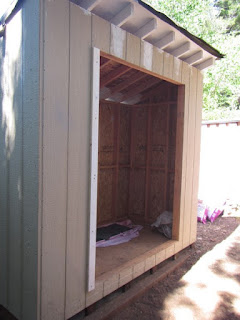 This is later after the first door has been fabricated and installed. The pine trim is all 1"x 3", but we ran out of pre-primed material and Ruby Sheep was not on hand to rescue us. 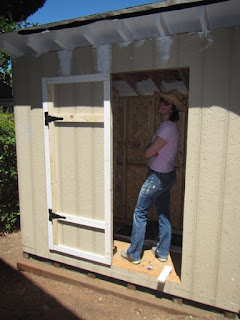 The is the interior look - this side will probably never get painted. The location of the trim is identical to the front; this adds strength and allows us to use longer screws to attach the trim. Time for a spot of luncheon. 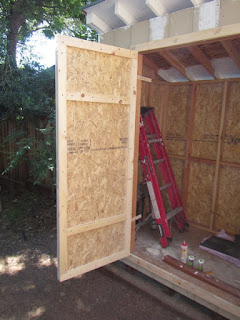 Lining up the siding to start the second door... 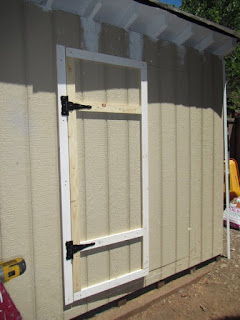 Both doors installed, hardware fitted and all the screw holes filled with bondo: 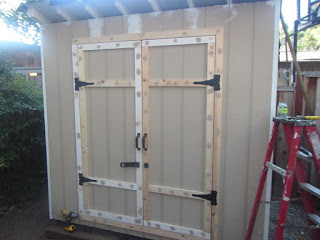 We nailed on L-shaped steel flashings at all four corners.... 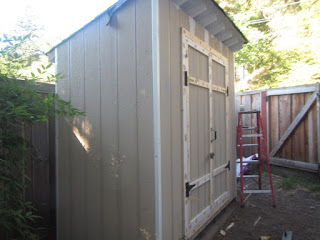 ...and then I put similar darker colored material around the perimeter of the roof - I should have got the ladder back out to take a proper photo really. 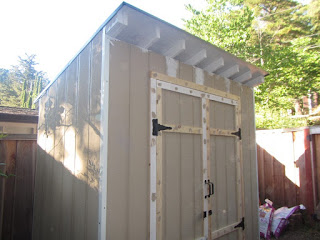 We had plans for Sunday that didn't involve sanding bondo or hanging garden tools, so this was as far as we got. Still, it is starting to look more like a shed than a bus shelter at long last! 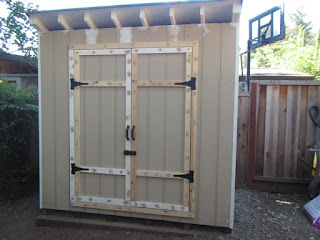 Tune in next time to see how it looks painted and over-filled with spades, rakes and other related tat!