If you saw the Escape from Lockdown movie, or failing that, if you read the news anywhere in the world right now, you'll be aware that everyone is, to quote my Grandfather, "out ont' bikes."

You might not realize it, but Sam has only recently started biking - it's something like four months at the time of writing since Amy Sheep decided he had to learn. After getting as far as he could on Quinn's old boneshaker, I had to do my bit, and get him his own machine.

Just getting hold of a new bike is a challenge; luckily for Sam we called a few places before we headed out and he ended up with a very smart TREK hybrid - it even has disc brakes, for Cliff's sake!


While we were walking from the car to the bike shop, I asked Sam if he was excited. Turns out he was. I described to Sam how I felt the day my Dad took me to buy my first proper guitar. Not the first guitar I ever owned, but the first professional quality instrument I came by - what became known as the "Blue Strat."  It was quite a memorable day for several reasons, but first a little bit of back story:

As I said, the Blue Strat wasn't my first guitar - that was my Dad's Levin. The photo a bit further down is how this guitar looks today; the spruce top has darkened, but otherwise it looks very similar to the day it was purchased for 62 quid from Kitchens Music Store in Queen Victoria Street, Leeds in around 1962; to put that in context a Fender Stratocaster was 159 guineas at the time. 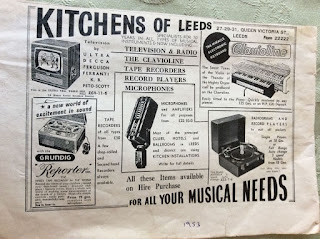 When I first got my hands on this guitar it was fitted with a bulky pickup which was mounted at the soundhole below the neck and connected to a cumbersome push-button control switch and jack socket located below the bridge. It meant you could plug the guitar into my Dad's 15 watt Selmer valve amp....when no-one else was around that is....but the pickup was never professionally installed, and it rattled a lot. Some time in about 1985 we took it off and filled the holes in the bridge with beeswax. 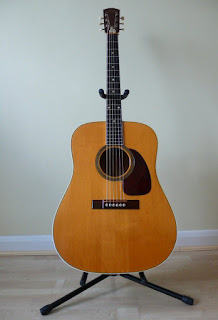 The Levin was a pretty decent guitar, as a beginner I was very lucky to have access to it. I took it on holiday to the Lake District once. It had an ebony fingerboard, but it also had a very high action and playing barre chords high up the neck was difficult. And it had another serious drawback: without the pickup it couldn't be plugged into an amp.

Both these issues were solved in 1987 when I somehow managed to scrape together 78.50 of ye olde english pound notes, which I took down to RockBottom in Croydon and exchanged for the white Marlin Slammer. This guitar looked like a strat, and was available in either red of white, both of which came with a white scratch plate. I didn't want to look like Hank Marvin, so I got the white one, and that's the only thing I can remember about buying this guitar. 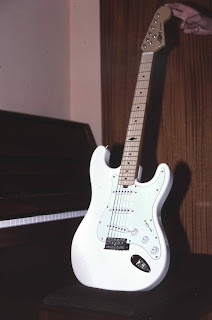 The Marlin was a bit of a plank, well actually it was a TOTAL plank, but I didn't realise that at the time. It really did help me get better on the guitar - the action was much lower and because I mostly played it without a amp, negative feedback from the family was reduced considerably. I played this guitar a lot, and I mean a LOT. After about a year my Dad told me I was due for a proper instrument, so I sold the Marlin to a mate for about half of what I paid for it. The next thing I heard, it was falling to bits...!

And so on to the Blue Strat. This guitar was also purchased from RockBottom in Croydon in 1988. It was (probably) a dull Croydon day when we parked the car. As we were exiting the parking garage Dad informed me that we had to make a quick detour on our way to RockBottom. What? A detour? I wasn't planning on this...

It turned out we had to swing by the department store first, so that my father could return several "items of clothing" that my Mom had previously picked up in error. Or something like that. Personally, I couldn't see the urgency. I was as excited as hell to get my hands on my new Fender, and wanted to get that part of the mission accomplished first. Having voiced this opinion I was informed that Dad had no attention of setting foot inside RockBottom while carrying a "bag full of bras."

So we trundled over to Marks and Spencer's in North End and joined the returns queue in the ladies underwear department. As you do. Eventually we got to the front of the line where the sniffy sales assistant spent an absolute age examining each of the bras; it really did go on for a long time. Finally she pronounced "One of these bras has been worn." Without missing a beat my stony-faced Father informed her that they most certainly had not been worn by him!

With that bit of drama out of the way, it was full steam ahead to the guitar shop, where my Dad exchanged UKP 325 worth of credit card debt for the sparkly-blue Fender Stratocaster. At the time the choice of colors was red (see above), white (just had that), black (meh), sunburst (too Buddy Holly) or blue (had to have it!). This is what the Fender looked like when it was brand new - i.e. before it was covered in stickers, dings, dents, and before it saw a paint brush or fell off a guitar stand... 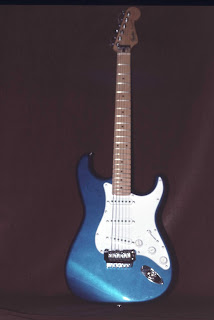 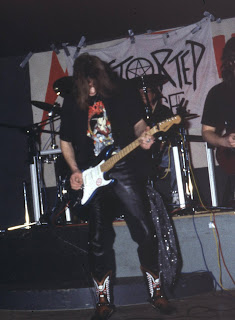 Sam putting the Blue Strat through its paces more recently... 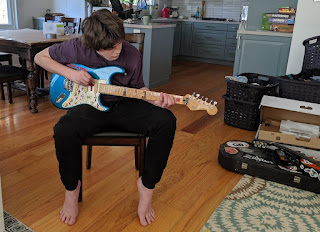 We were supposed to visit the Sheep homestead in England this Summer, but obviously those plans were canned a while back. Instead, we managed to sneak up to the Tahoe river for a few days of canoeing, kayaking, paddle boarding, and biking. We also stayed at an AirBnB with a decent pool table. Check out the highlights:

(*we didn't get any footage of the water based activities due to not having a waterproof camcorder just yet).
at August 09, 2020 No comments: