A few weeks ago, I destroyed the hose bib that passed through the area that is now occupied by our front porch. Amy Sheep has been struggling to water some parts of the yard ever since.....

So....time to do something about that! I started off by attaching a new lead-free brass bib to a copper compression fitting (don't forget the thread sealer!) and then soldering that to an overlong section of copper pipe. I need four of these in total, but I just made one to begin with and then went into production later. I've actually never "sweated pipe" before, so it was fun to learn something new. 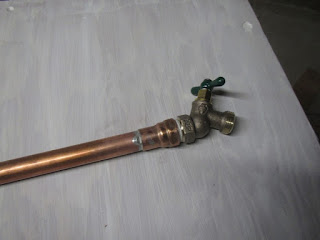 The next step was to drill a one inch diameter hole in the wall. The pipe passes through brickwork at the exterior and the rim joist at the basement side, so I had to use a mixture of drill bits. i.e., 3/16 long series masonry all the way through from the outside, then expand the hole in the brick to one-inch from the exterior, and then come back the other way with a one-inch spade bit. The pipe is 3/4 inch internal diameter, so I have a bit of wiggle room. This is the view from the outside with the hose bib in place: 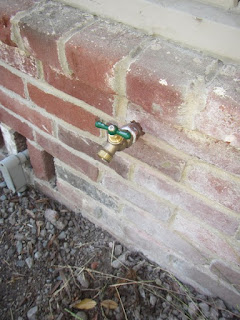 At the basement side, the copper pipe has been trimmed and connected to a new PEX supply line with a push-on brass 90-degree Sharkbite fitting. I used these fittings for all of the copper/PEX and PEX/PEX junctions. The brass clamp in the background is screwed into the rim joist and is designed to stop the hose bib from rotating. 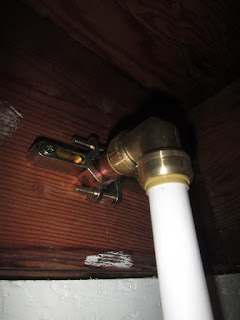 I also installed a pipe which will serve the irrigation system in the front section of the yard. PEX pipe is light sensitive, so this section had to be made from copper. I sweated these joints since I don't want them to rotate like the push-on fittings do. 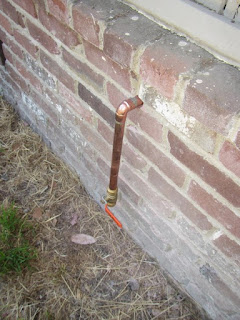 I installed two hose bibs at the front of the house, either side of the irrigation line. Later I will install a third next to the garage and a fourth at the interior of the basement close to the sump pump. The plywood paneling that I installed in the basement a few weeks ago was primed and painted before the plumbing lines were installed. 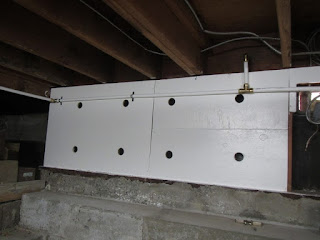 The opening you can see at the right side of the photo above is an access panel for the electrical junction boxes that I will be installing - this area needs lights, outlets and a 220 V connection for the cabinet saw. This is also where the cables that serve the exterior outlet and the streetlamp pass through the exterior wall. 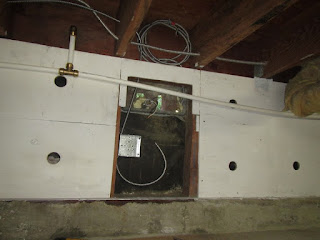 Sam helped with the painting, and we did the wall between the basement and the garage at the same time: 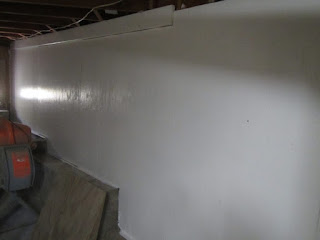 This is the connection to the exiting plumbing line. The plywood shear wall is much stronger with the pipe passing through it than it would have been if I installed the plywood around the pipe. 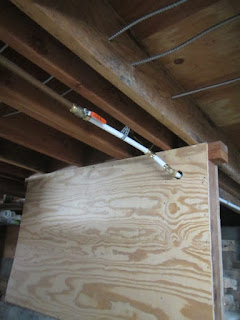