We're going to have a fence installed at the perimeter of the yard where the raised beds are located - we lost too many plants to predators last year to ignore them any longer.  I say "have" a fence installed, because I don't feel like doing it myself!
Before we can install the fence, we have to figure out exactly where we want to put it. We planned ahead and called those fire-starting, ill-prepared very nice folks at PG&E, and they came by and marked the location of the gas line. This was fortunate, because the gas pipe runs very close to where we were thinking of putting the fence.
After the gas line, the next biggest obstacle was the brick patio in front of the house. Eventually the whole patio is going to do one, but for now we just need to get rid of the two (2) feet furthest from the porch.
It was pretty obvious that the bricks had been installed on top of a concrete pad - it wasn't exactly clear how deep the concrete was, or whether it was solid - I was hoping it might just be a concrete perimeter...
We started chipping away at the brickwork...it soon became apparent that the concrete was a thick slab all the way through....this means more effort to break it up and more broken concrete to get rid of. 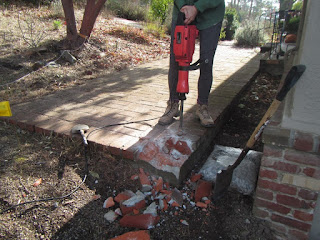 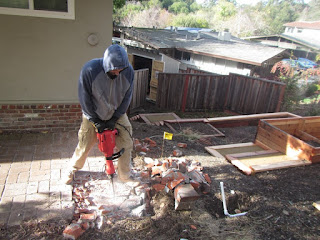 This is after about 45 minutes of breaking off bricks and, mostly, pieces of bricks, with the spike attachment on the jackhammer. It might look sunny in these photos, but it was less than 50F/10C and there was a strong wind. 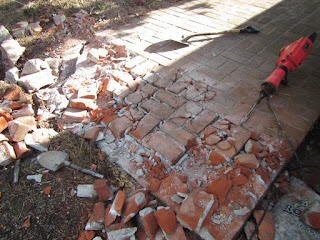 After cleanup phase #1 and a quick raid attack on the thinnest corner of the slab, I was relieved to discover there was essentially no rebar in the concrete. 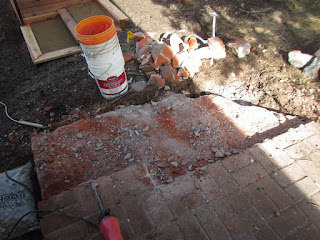 Breaking up the thicker side of the slab required quite a bit more effort so I handed the jackhammer over to Amy Sheep. 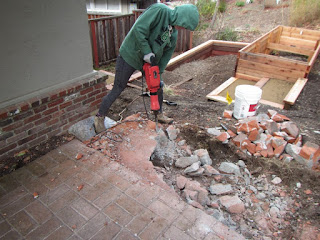 All done! Well sort of....we've removed about two (2) feet of the patio. There's at least another fifteen feet to go, but I have a feeling we won't be doing any more of it ourselves. The fence can now go in between the remaining section of the patio and the gas line which is marked with the yellow flag in the photo below. 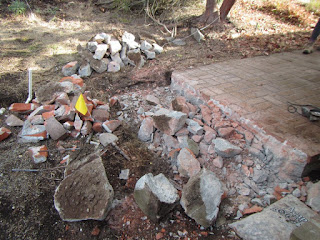 In addition to all the debris strewn around in the above photo, we filled ten five-gallon buckets with broken up masonry. 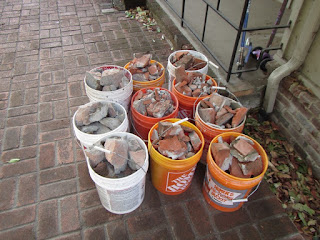 After lunch we carted all the debris over to the driveway. Then we filled in the hole and smoothed out the dirt between the remaining patio and the raised beds. 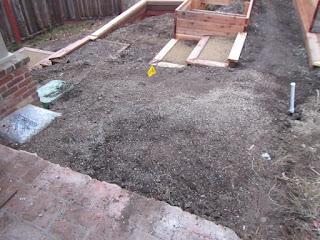 That just left a tree stump to get rid of...it looked pretty small at first... 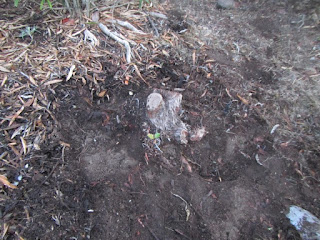 Looking quite a bit bigger after a hour or so alternating between the spade, the trowel, the jackhammer and the circular saw... 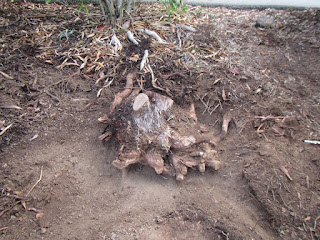 Finished it off with the chain saw and my sledge hammer. Now we just need to put the fence up. 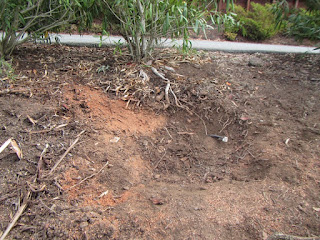 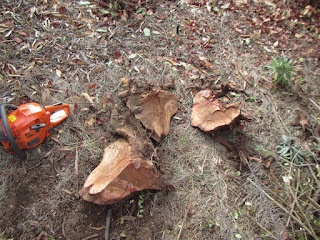 This post has been two years in the making....clearly getting it finished wasn't a priority! So, we used to have some ceiling mounted cabinets in our kitchen. The photo below was taken in January 2019 about ten minutes before I ripped them off the ceiling. 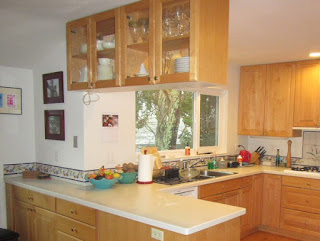 I think it was probably six months later when I had a free weekend that I chopped the cabinets in half, made some replacement back panels out of pegboard, and hung them in the garage. That's how they stayed for the next year or so, while I gradually filled them up with what my mother would call "junk." 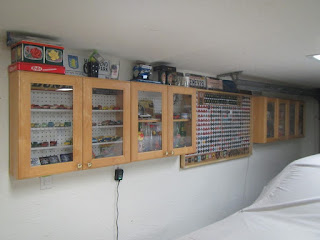 Back in April/May when work was pretty slow I sealed the garage floor with epoxy and painted the walls and ceiling. The cabinets had to come down off the wall for that, and since I was always planning to paint them eventually, I figured the time had come. Of course, within a few minutes of taking down the cabinets, the pace of business ramped up in a big way and the painting project hit a wall. 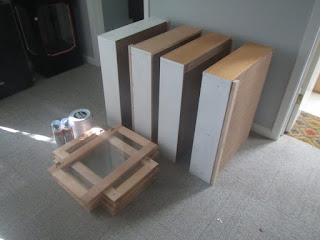 Eventually, the doors and shelves got a coat of primer.... 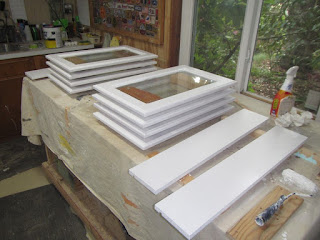 And the cabinets were repaired... 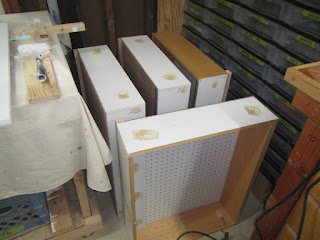 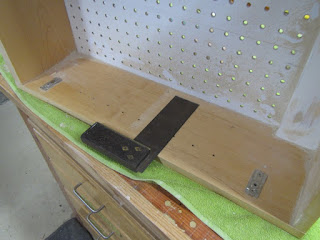 ...and painted with primer. 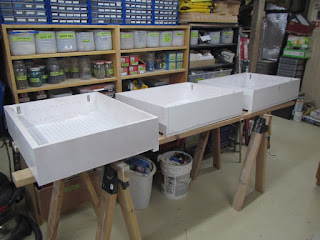 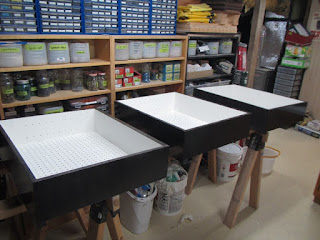 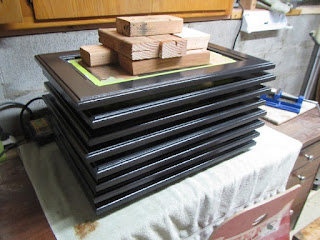 Ready to re-install? Not quite. After the garage was painted, the bench and toolbox went back where they came from. 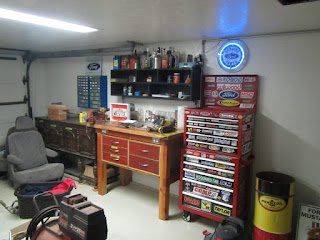 It turns out that our plan for world domination will succeed more smoothly if the toolbox and bench were placed at the other side of the garage. It's called mirror plane symmetry. It also means that folks can take bicycles in and out of the basement without going close to the '68. 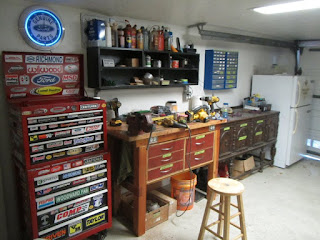 So, back to the cabinets. They're attached to the wall with a French cleat - the advantage of this method is that the cleat can be mounted directly into the wall studs; the cabinets do not necessary have to overlap studs as they would if mounted independently. 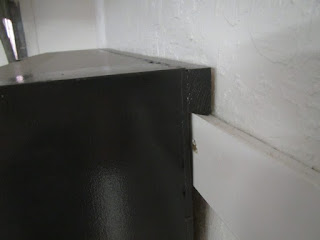 A spacer piece at the back of the cabinets helps them hang correctly. 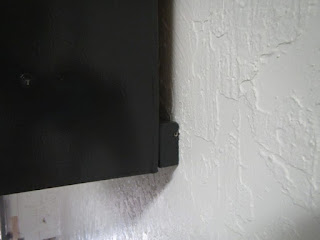 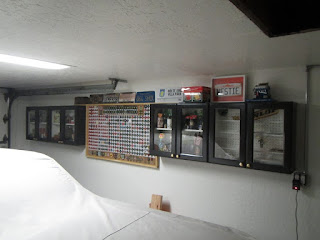