We've received a lot of feedback on our garden tool shed - most of it wondering about when the tools were going to be put to use. Well wonder no longer!

In February 2019 we built our first two raised beds at the top of our side yard, and approximately eighteen months later we're ready to go back to work on this area - we have plans for another raised bed, a set of stairs between the beds and the gate, and a low retaining wall at the front of this area.

A couple of weeks ago we picked up a bunch of 4" x 6" PT lumber, the same stuff we used for the base of the tool shed, and set to work on the stairs. Amy Sheep wanted to dig out for the stairs with a spade, but that idea only lasted a couple of shovelfuls... 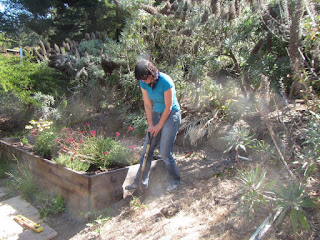 ....before we broke out the jackhammer and fitted the spade attachment - this process works best with one person manning the jackhammer and a second shovelling the loose dirt into a wheelbarrow. This is the situation after about half an hour of excavating and a quick mock up of how the risers will look: 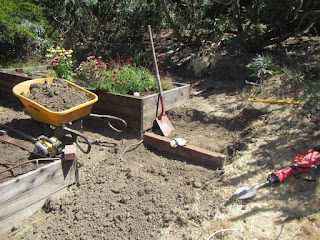 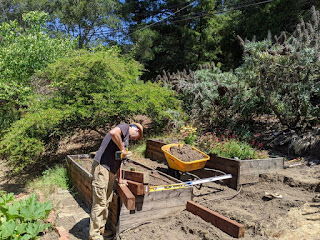 We bought a bunch of 1/2 inch rebar, which I cut into two foot pieces with the screaming wheel of death - it is much cheaper to do this than to buy the rebar in shorter lengths. 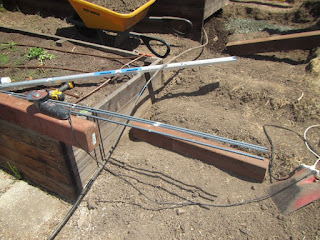 Each riser was installed on top of a level bed of road base, and pinned with three pieces of rebar - whacking the rebar into the ground was the toughest part of the project. 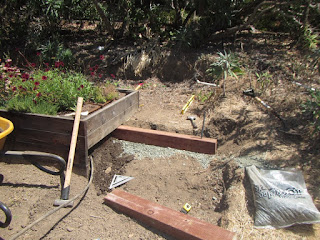 By the end of day one we had five risers installed at the side of the raised beds. 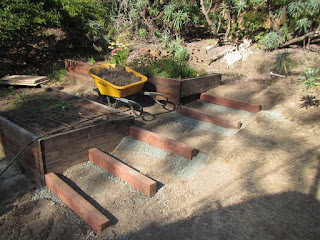 It was a couple of weeks before we got another chance to work on the project. We started out by digging out space to install the side pieces of the stairs - this was done with a combination of the jackhammer, the shovel and the wheelbarrow. 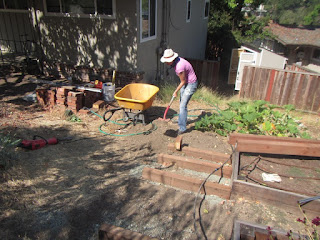 This is the look after the first side piece was installed: 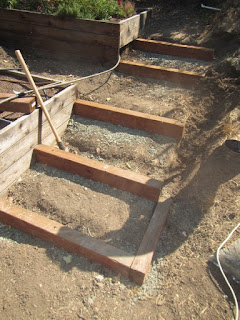 Doing the digging was hard work because it was supper hot at the time, as this photo sort-of shows: 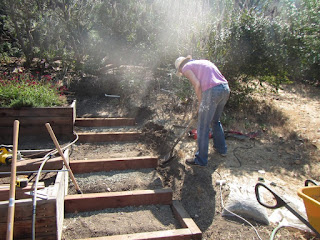 We installed the side pieces with a 2 foot rebar stake at the upper end..... 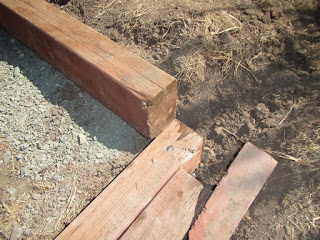 ...and a pair of six inch screws at the other end which are driven into the perpendicular riser. The next side piece goes on top of the previous section which obscures the rebar stake: 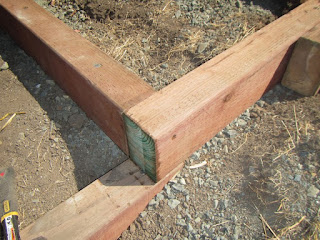 It is not obvious in these photos, but the side sections are also installed on top of leveled road base. 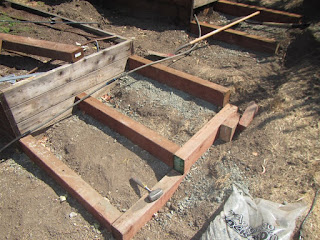 As we worked further up the stairs the dirt gave way to rock - fortunately it was no match for the jackhammer, but it did make hammering in the rebar very difficult. 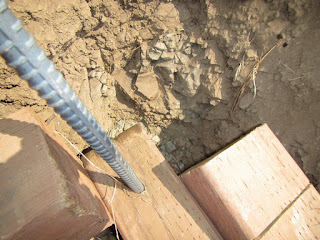 We're going to be modifying the two original raised beds as part of this project - they need to be a little bit more "raised" and we need to improve the structure and the drainage. We started off by removing the front of the upper bed: 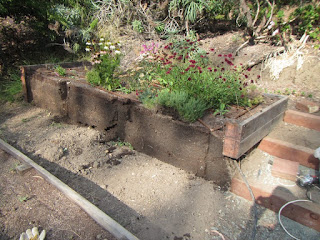 We then dug back the dirt back about six inches from the front of the bed, and six inches below, and then re-installed the lowest board onto two new corner posts - the posts are six inches longer than they were originally. 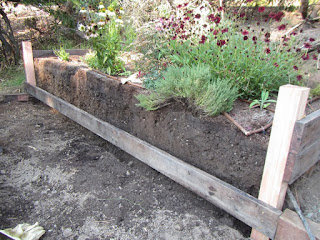 After also replacing the two central posts, we filled the trough below the lower board and the area behind it with crushed stone: 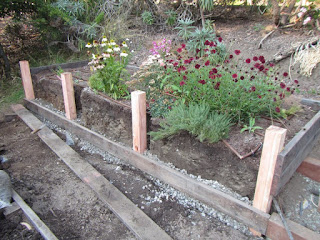 The remaining boards were then re-installed and backfilled with dirt, one at a time. 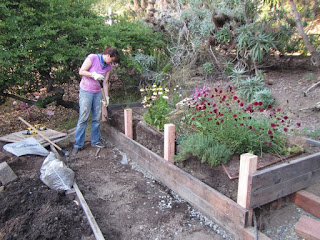 When this was done then bed looks the same except for the new posts which protrude enough for one more board to be installed. At present there is a state-wide shortage of lumber in California because the saw the mills have lost a lot of production time to the pandemic. We may have to wait a while before we can get hold of the twelve foot lengths of lumber we need. 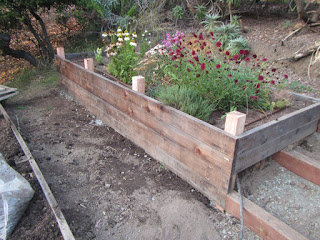 This is the big picture after two more-or-less full days of work on this area: 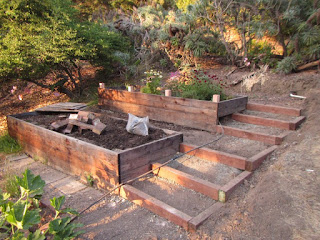 We'll be building a low-ish retaining wall at the top of this area in the near future. 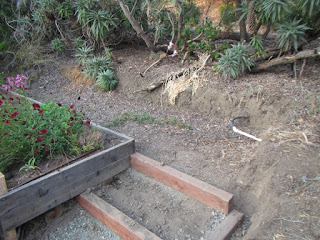 The third raised bed will be going in the space where this year's pumpkin crop is located. 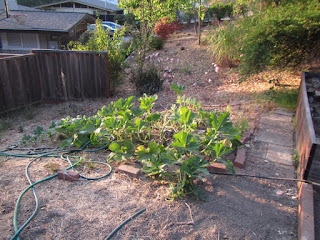