This gestation period for this post has set a new record, even for this blog, and I'm only writing it now because I'm on vacation from work/real life for a few days over Thanksgiving. I had planned to make the basement project Video Only, but for now that format has suffered a Twickenham Studios-style abandonment due to the following:
1. Setting up the camera and keeping on top of batteries, memory cards and decent camera angles slows down the project.
2. Editing the videos takes a lot of time.
3. A lot of the content is the same...
4. The time lag between doing the work and editing the videos means I'm bored with the content by the time I'm watching it back.
5. Surely that's enough...
Therefore, the next few sections probably the rest of this story will be told with stills which have been pilfered from unpublished videos, or snapped with my trusty canon powershot™.
So, with all that out of the way, what's been happenin' with the basement? This is the scene at the end of the last video; in real time this was the end of March 2021. We are usually done with wet weather by this point in a typical year, but we know the basement will flood when it does rain. So, the smart thing to do at this point is make a proper pit for the sump pump. 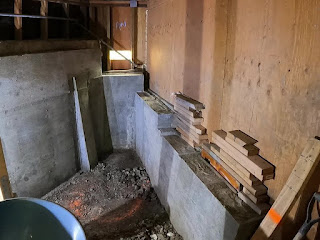 I started off by digging an eighteen (18) inch deep pit in the far corner of the basement. 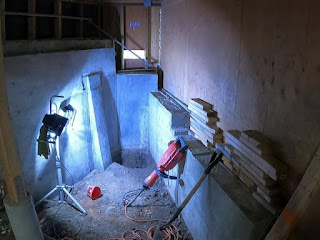 Then I knocked up a topless and bottomless (!) box that is about sixteen inches square. The box is made from 2" x 12" pressure treated lumber. 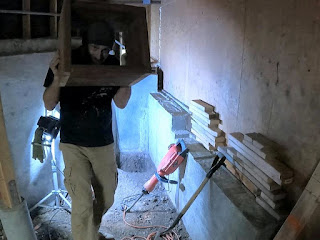 In the next photo you can just about see the box in situ. I had to fiddle about (!) a bit to get it level:

This is the view after a second identical box has been placed on top. The plan is that the concrete floor will be flush with the top of the second box, so for now it protrudes about six (6) inches above the dirt. I will be installing the sump pump and the discharge pipe at the first hint of rain... 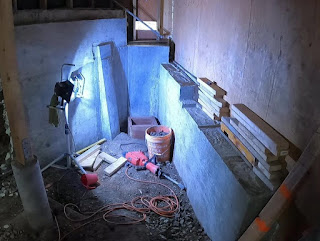 So, with that done, on with the show! In the next photo you can see the first section of the concrete we installed at the left, and the most recent section at the right, with a gap between them.  The obvious difference is the more recent section extends much further up the original foundation. This is based on advice I received from a contractor friend who came by to check on my progress. The extra concrete means I can make twice as many attachment points with the rebar. Basically, when in doubt, make it stronger. 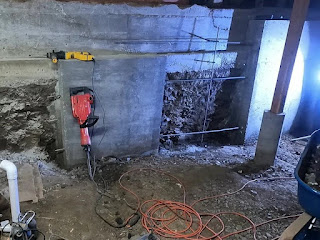 This is best illustrated in the next photo where two (2) rows of rebar protrude from the original concrete: 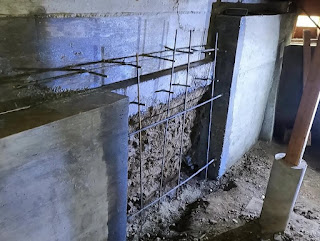 This later after the forms have been constructed... 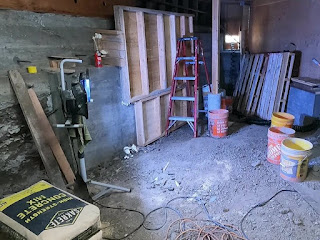 Later still and the mixing/pouring operation is in full swing... 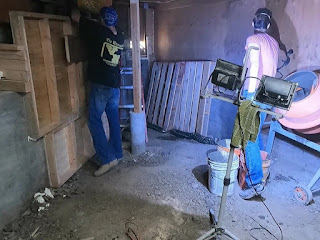 tune in again next week soon for another scintillating installment!
at November 27, 2021 No comments:

More guitars? Really? Well, yes, just one more. For now, anyway. I wrote in part two about how I spent a while looking for the perfect Stratocaster, and ended up with a '52 Telecaster reissue instead. The Tele is a beautiful guitar that has seen a lot of playing time over the last few years, but I have still been on the lookout for the right Stratocaster. My dream guitar would have been David Gilmour's legendary Black Strat, but I was outbid by just under USD 3,975,000 when it came up for sale in 2019. The Fender Custom Shop made replicas of this guitar which even included the wear marks, but even these instruments are outside of my price bracket. Fortunately a resolution presented itself...

The solution was the 1982 Tuxedo Black Stratocaster I found online in September this year. After Leo Fender sold his company to CBS in 1965, there was a gradual decline in the quality of guitars produced. It's well documented that the upswing began with the 1981 hiring of several key staff from Yamaha, including director of marketing Dan Smith.

The revamp that followed these appointments led in late 1981 to a new model named the Standard Stratocaster. While retaining the CBS-era larger headstock logo, the guitar reverted to four neck bolts from three, introduced a new “hotter” X-1 pickup in the bridge position and returned to body end truss rod adjustment (no more bullet). In 1983 the guitar was revised again by moving the jack plug onto the pickguard and removing one of the tone controls; the CBS 70s style headstock logo was also dropped in favor of a smaller, silver design which was used until 19871.

The 1981-83 version of the Standard Stratocaster has come to be known on the interwebs as the “Dan Smith Stratocaster”, even though Smith wasn't involved in the design and his name does not appear anywhere on the guitar. Unlike the earlier Stratocasters, guitars from this era are still affordable, and can only appreciate in value.

This particular Stratocaster has a tuxedo black finish which is in excellent shape. The vintage neck is VERY comfortable to play, and the guitar sounds fantastic through my Orange amp. It also came with the original hard shell logo-embossed case, shop tags and owner’s manual. Still, as you may notice from the photo on the left, it has one minor detail which is not ideal. 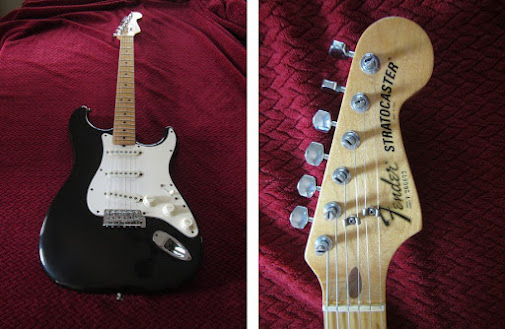 Samuel Sheep and I had a plan to fix the "imperfection" which started off with pulling off the strings, disconnecting all the electronics and getting rid of the white (elephant) pickguard: 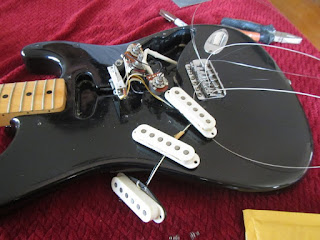 Then we reassembled the electronics with a brand new black pickguard instead, and I had Sam put on new strings and tune it up. It's actually quite tricky to get this guitar in tune. 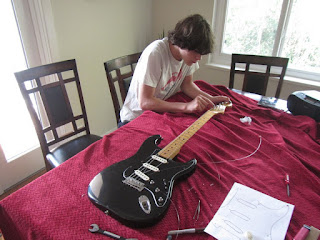 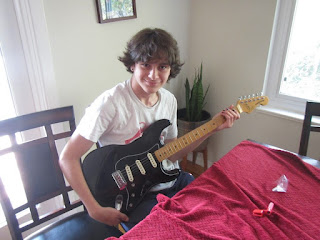 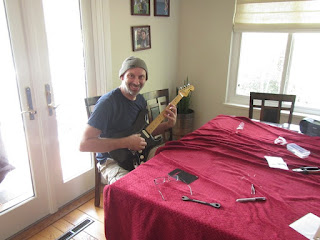 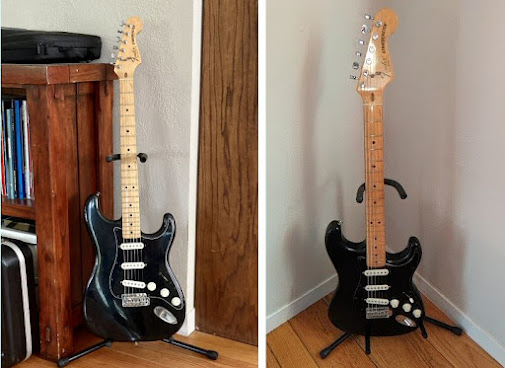