Hello again from Planet D.I.Y! In case you were wondering, I have been beavering away behind the scenes, but have suffering from a creative impasse in terms of linking those scenes together into a cohesive product. I've also been struggling with editing the footage of the basement expansion project, but finally I do have some good news to report: while our lengthy negations with a Top film editor have yielded nothing more than a week-old cheese and onion pasty and a half drunk bottle of Holsten Pils, we have secured the services of the highly rated Paul Circus to fill the Executive Producer's sizable office suite. Anyone who endured either episode one or the somewhat improved episode two will notice his sticky fingerprints all over episode three! 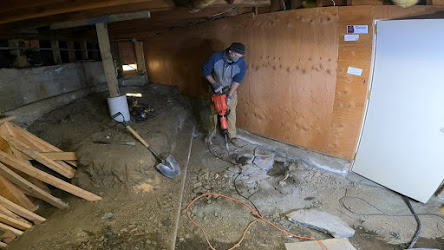