Sometimes I wonder if this project will ever be finished! As I mentioned in part nine, we have a steep drop adjacent to the house which we have need to deal with. There were timber stairs in this area at one time, but we demolished those way back. We ended up making the slope into several tiers thanks to repurposing some irregular paving slabs and moss rock from the unfinished part of our front yard.

We built a level area at the top of the slope from which we can access the irrigation boxes and the newly-painted gas meter, if we need to. 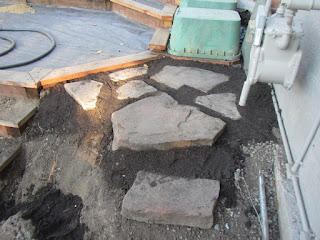 Below that we built a retaining wall from moss rock and another walkway which leads to the hose shutoff valve. The gaps were filled with ye olde topsoil. 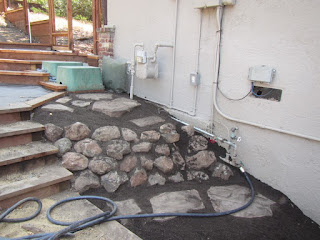 The slope below this was gentle enough that the new topsoil can be retained with just one row of moss rocks: 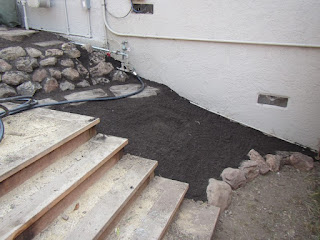 With this all buttoned up, we turned out attention to the waste land in front of the lower retaining wall and between the fence and the raised beds: 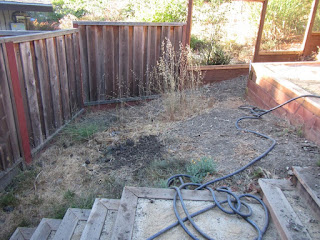 We gave all the long grasses and whatnot 30 seconds to leave, and those that didn't do one were treated to the fine twine in Amy Sheep's brand new weed whacker. 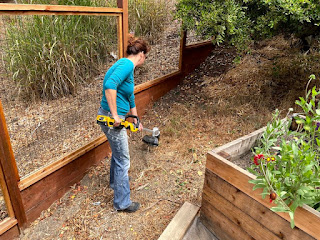 This is the after the weeds had been whacked and we'd made a pitstop for landscaping fabric, tent pegs and some mulch: 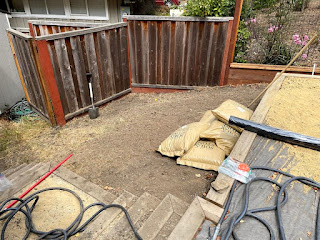 We laid the fabric all the way along the fence and past the gate: 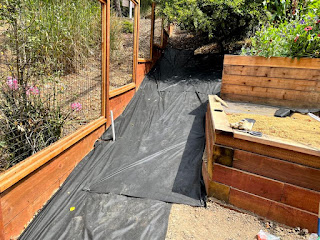 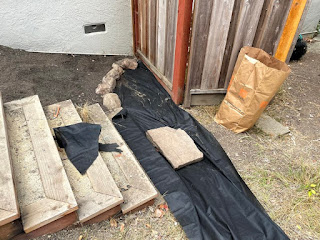 This is later on, after several inches of mulch were spread on top of the fabric. We will be planting in these areas in the Spring, but for now we are hoping this effort will keep everything looking tidy. 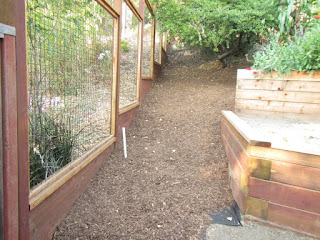 We'll be planting ground cover in the area that we didn't mulch in the next few weeks. 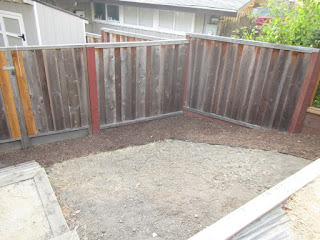 Fast-forward to the Friday before Labor Day, and we had a couple of yards of Decomposed Granite (DG) delivered for the walkways and steps - these areas have been a work-in-progress for many months. 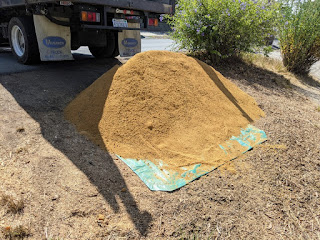 The next couple of hours and the first bit of Saturday morning were spent spreading the new DG on the walkways and steps - some of these areas were part-filled some time ago. This process consists of dumping piles from the wheelbarrow and spreading it out with a mixture of the rake and one's plates of meat. 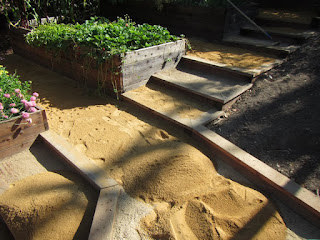 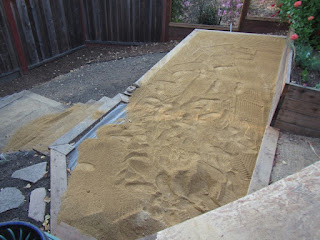 We did some screeding until the DG was about 80% of how we wanted it. 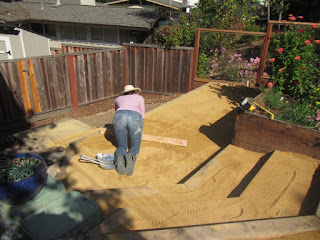 By now the pile was looking considerably smaller.... 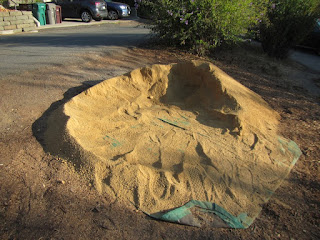 Time for a cold diet coke and 15 minutes sitting on my arris. 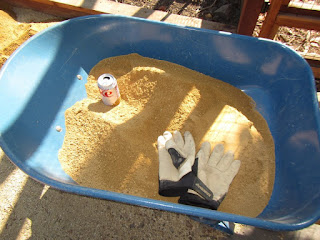 While I was enjoying the above noted rest period, I had Amy Sheep run a plate compactor over the walkways - the compactor was too big for her to use on the stairs unfortunately.... 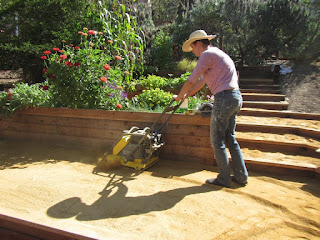 ....so I had Amy compact those in the more traditional way: 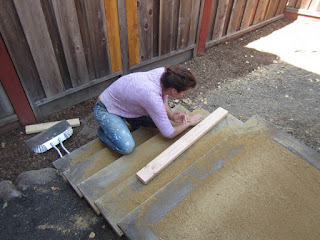 After all that, it was time for hosing down the DG and re-screeding to get the level perfect - we had to add small amounts of DG to the low spots, remove if from the high spots, and rinse and repeat. This is the result after many sun-drenched hours of intense hard labor. 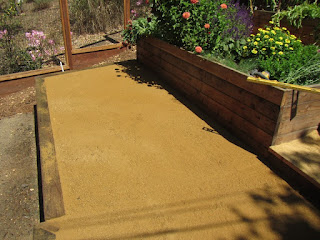 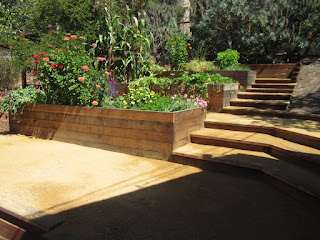 The next day Amy Sheep planted ground cover between the paving slabs and at the lower slope. 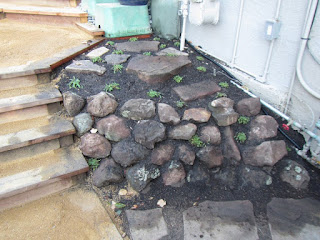 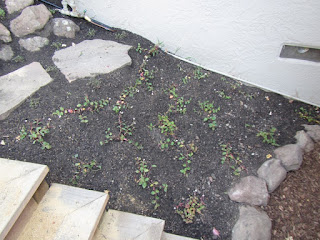 This is later on. The patch of bare earth in the upper right of the next photo will be covered with topsoil and planted in the Spring. We already have an irrigation line to this area (white pipe at right). 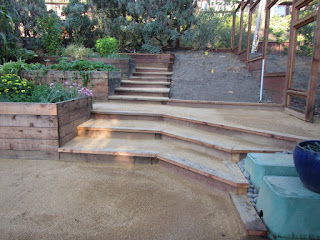 Delilah cam out to help me pack up. 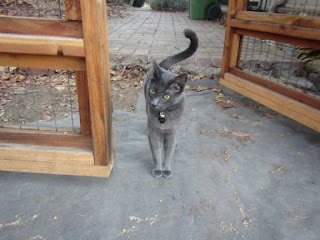 I explained to her that we will be getting rid of the rest of the brick pad in front of the house eventually and extending the DG walkway beyond the gate. The black trash bags you can see in the background are filled with the DG we has left over. 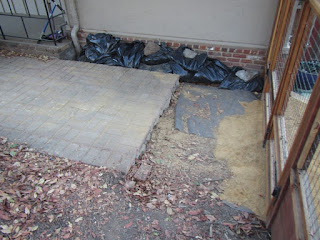 The basement expansion project has been plodding along at a similar rate to the fil editing....ie kind-a-slowly. Still, after hunting around behind the metaphorical couch, I managed to come up with enough uninterrupted minutes to cobble together what from now on will be known as episode eight! 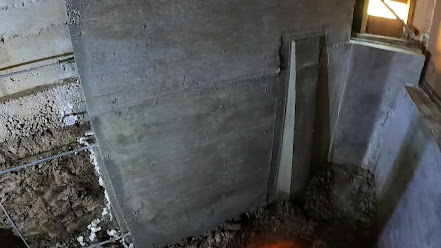 Previous installments may be avoided by getting out into the non-cyber world and not clicking on any of the following links: