It's been a while since my last post, partly because I've been busy making a living, partly because progress with the yard project has been slowed by the heatwaves and by a some other priorities, but mostly due to a severe case of writer's block. This has been a labor intensive project that has not exactly sparked joy, and writing about it has been a low priority...until now!
So, this is where we got up to last time out: we've installed extended posts at the front of the upper planter and improved the drainage, and we've built the first section of the stairs. 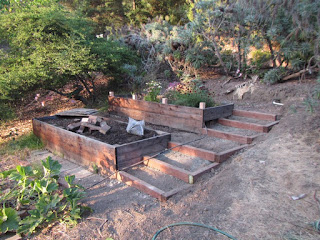 Ultimately we plan to continue the stairs down to the fence/gate in front of the shed, and construct a third planter. We will be extending the height of both existing planters by six inches (or one board width), improving the drainage, and installing some additional bracing which we hope will stop the planters from bowing. 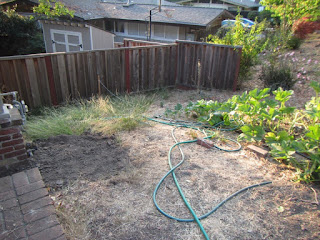 We planned to spend most of the Labor Day weekend, the last public holiday before Thanksgiving and traditionally the end of Summer, ploughing on with the project. While typical labor day activities might include barbeques, picnics and pool-based socializing, the there is not much of that going on at the moment.....so we might as well spend three full days grinding away....at least, that was the plan....
Samuel Sheep was around right at the beginning of this part of the project so he started us off by removing the boards from the front of the lower planter: 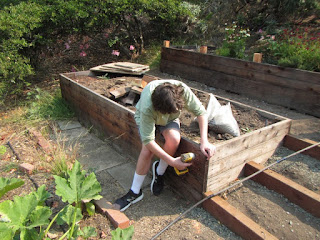 The dirt in the planter was very dry, so we didn't suffer any slippage. 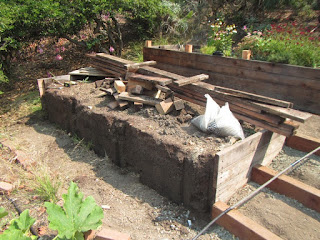 The boards we took off were transplanted onto the other raised bed... 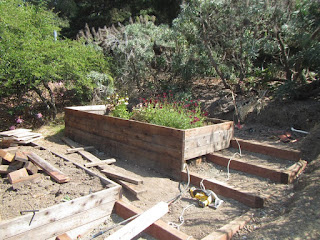 And, after we replaced the original upright posts with new longer ones, the rest of the original boards were added to the sides and rear of the planter they came from. 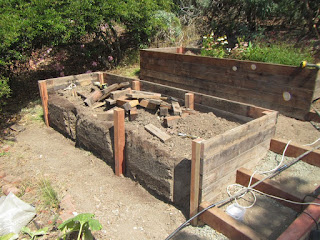 This is where it gets interesting. There is a statewide lumber shortage right now due to all the production time the sawmills have lost through you-know-what, so we were not able to get the 2"x 6" redwood lumber we needed in twelve foot lengths.....all we could get was a bunch of sixteen foot boards....getting them home from the store was an interesting experience! They only just fitted inside the garage: 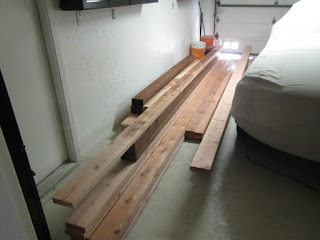 We installed the top board on the second planter and started digging out for the cross braces. It was getting very hot by this point, somewhere around 30 C/90 F according to the interwebs, but it felt a lot hotter. 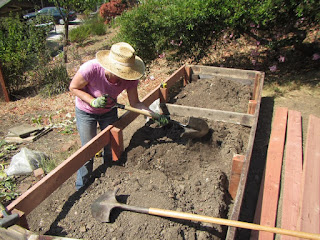 This is a bit later with the second brace installed and the base rock packed behind and below the lower board: 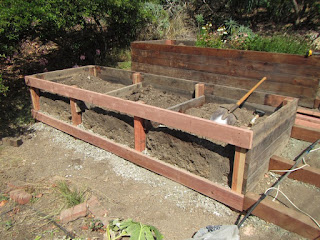 All done! Well, all done with the planter modifications that is. If it looks hot in these photos, that's because it was. It was well above what my father used to call "B. Hot." We actually had to retreat back inside the house at this point, because it was just too hot to to stand around, never mind work... 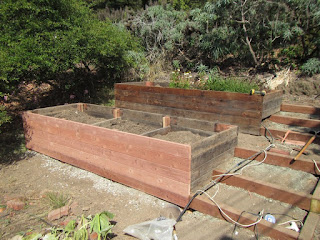 By about 4:30 pm the temperature was just about bearable in the shade, so we set up riser production on the porch. 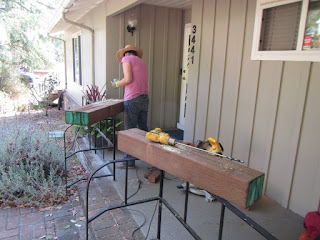 By now most of the yard was in the shade, so we moved on to installing the next riser. 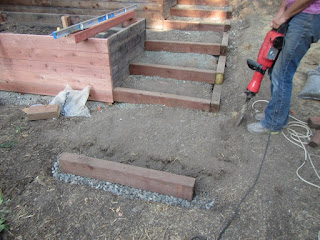 The location of the riser also dictates the location of the third raised bad, so the next step was to start laying out the corner posts. This was as far as we got because it was still mega hot and we were tired and dehydrated. 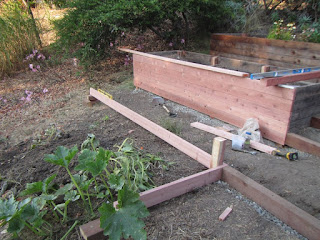 The next morning, after our customary lie-in, Amy Sheep set sail for the grocery store, and I ventured back outside to continue building the third planter. It was even hotter on this day, and I did not get very far before I had to crawl back out of the sun. 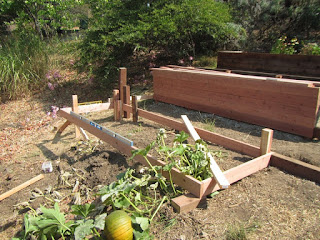 I didn't realize it at the time, but that was the last bit of the work I did in direct sunlight - it was just too hot. We we did accomplish was done after the sun passed over. The third bed is mainly complete - we need to acquire some more 2" x 6" redwood to finish it up....whenever that becomes available. 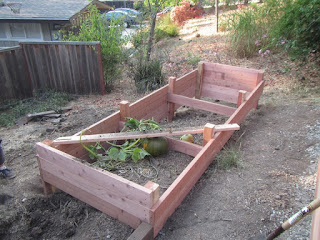 We also did some more work on the steps.... 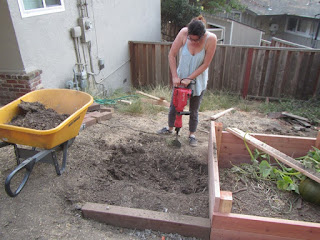 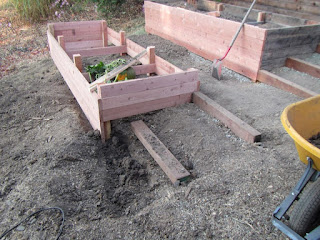 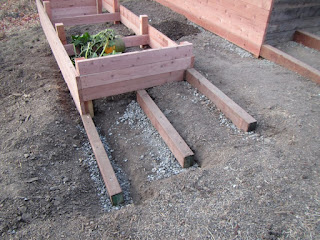 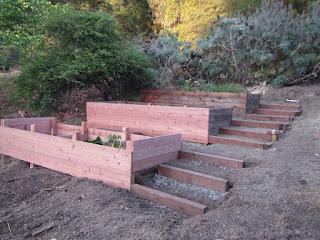