It's the morning after the night before, and the night before was Thanksgiving 2020. With that out of the way, and in light of the relatively low-key approach  Amy Sheep and I have taken to our projects recently, we were more than ready to get back to diggin' dirt and swingin' the sledgehammer. We had a serious need to get dirty and sweaty. In the yard.

First up was finishing the retaining in wall. Each course is set back ½ an inch from the previous layer, and attached with rebar stakes every two (2) feet or less. 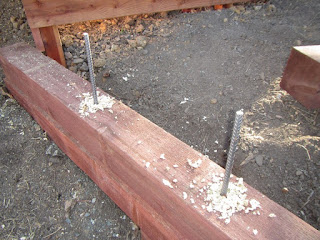 Remember to wear your safety specs when pounding rebar or you might get some doins in your peepers. 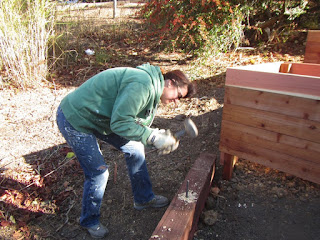 All done - we'll be adding a decorative cap to the wall later: 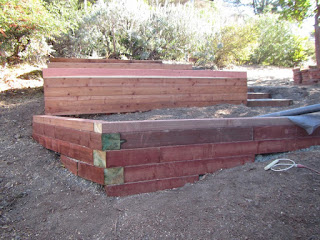 For this part of the project I have been road testing the very comfortable and hard wearing gloves I received for my recent birthday. This is how they looked after a morning's worth of work: 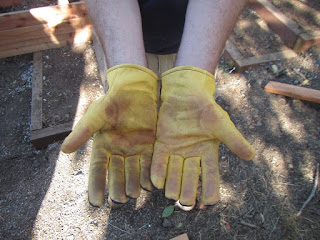 With the retaining wall completed we went back to installing weed cloth on the lower section of the steps. As you can see from Amy Sheep's thermal clothing, the ambient temperature was hovering around 60 F/15 C in spite of the sun being out. 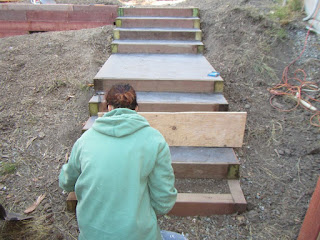 This is the finished look. Time fort cup o'tea; no wagon wheels this time though. 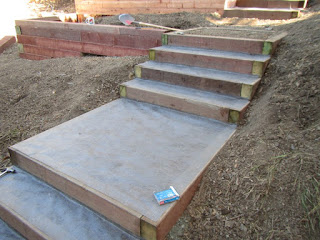 After tea on the lawn dirt-laden slope, we were ready to move onto the interesting bit - installing the redwood tread caps. As previously mentioned, we have been waiting a while to get hold of enough redwood to complete this part of the project. We started by constructing the ideal front piece, and then we used it to cut the others to the same dimensions. 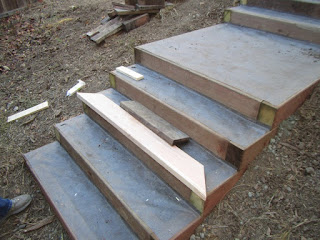 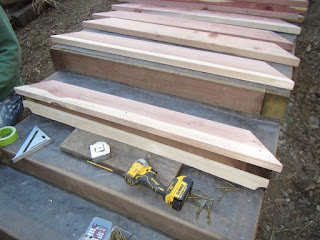 Time for installation. We drilled pilot holes in one section, and then used it as a template so all the holes are in the same places on each board and all the screw heads are aligned. 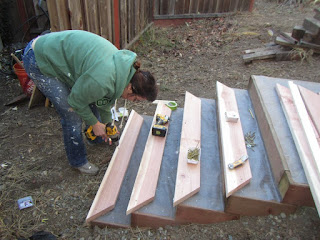 Moved on to the side pieces: 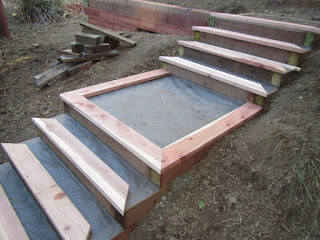 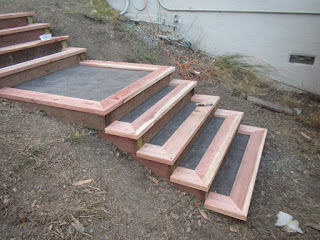 Mid-section also completed up to the retaining wall: 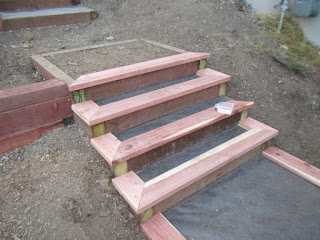 And the top section. We actually completed this on the same day, but by the time we were done it was too dark to take decent photos, so this picture was snapped the following morning. 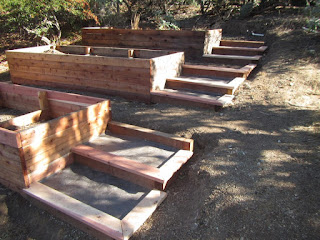 We haven't quite figured out how the top step is going to meet the upper retaining wall and/or fence, so this little bit is unfinished for now: 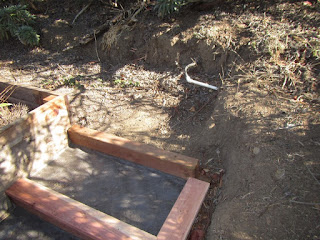 We added the same redwood cap to the retaining wall. This bit was done the next day. 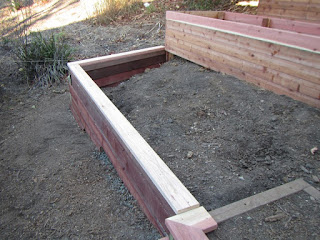 The stairs are starting to look like a professional project. I'm happy to report that this phase of the project has been a LOT more enjoyable. 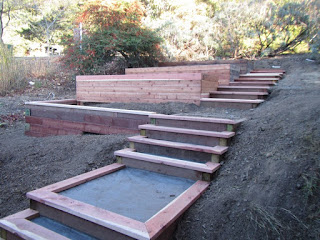 The next "step" was to fill the stairs with Decomposed Granite (DG), which is in essence crushed stone. It is easy to compact and forms a solid pad. We picked up 10 cubic feet which was just about enough to fill the finished sections of the steps. 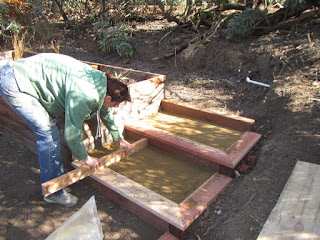 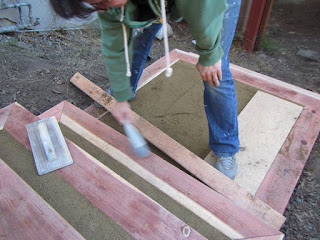 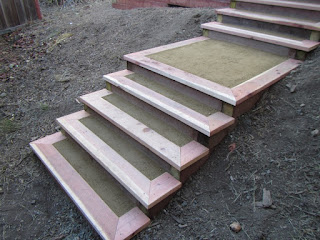 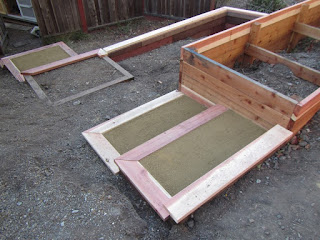 We'll be putting DG down on the walkways too, but first we have to install the irrigation. We get a flow rate in the range 7-8 Gallons per minute, so we are using ¾ inch diameter schedule 40 PVC pipe which will be buried about six inches down. I broke ground between the lower and middle raised beds. 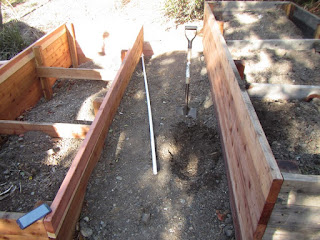 This is later after I dug a twenty (20) foot trench and laid the first section of the pipe. The vertical section in the foreground will eventually be connected to the water supply. 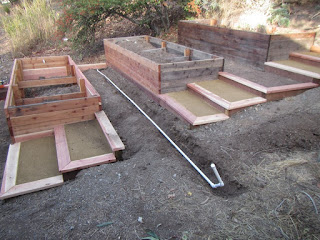 The irrigation supplies all three beds, and each bed has an independent shut-off valve. I dry fitted the pipe together initially and the did all the glue-ups at the end. 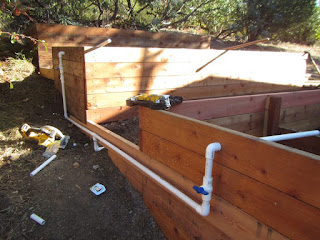 The PVC cement leaves unsightly purple stains if you're not really careful. 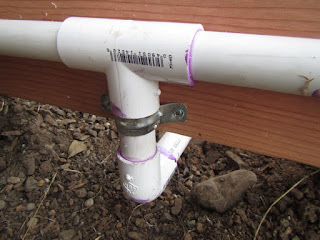 This is the finished look after glue-up and installation of the pipe clamps. 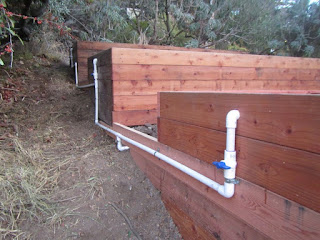 The main line was duly buried six inches under, or thereabouts. 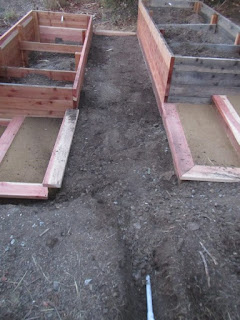 This is the overall look of the yard at the end of the Thanksgiving break. We still have to finish up the walkways and connect the irrigation. We'll also be installing a perimeter fence to keep out the predators that decimated last year's strawberry crop. 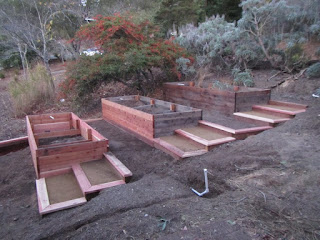 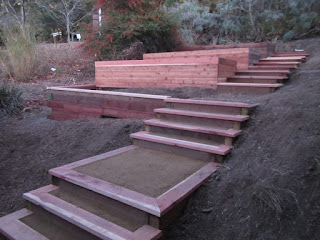 The area behind the retaining wall also need backfilling with dirt before we can install the DG, and the level of the dirt needs to be raised inside the planters and in several other locations.  Stay tooned to find out where all that dirt is going to come from! 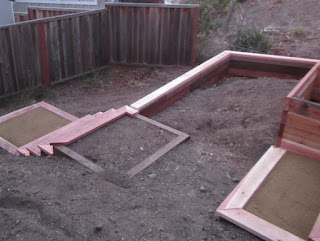