Just a fence left to do huh! That may have been how the last report on this project ended, but it turned out to be far from true. Here's the thing: we do need to put the fence up before we can plant anything, but we also need to lay down a lot more decomposed granite, probably 50 bags of rich topsoil, and we have a retaining wall to build at the top of the slope. Fortunately, we figured out that if we put the fence up first, all of the above materials would have to be carried down the hill, through the gate, and back up the hill. Once this dawned on us, the fence went back on hold!

So, after another trip to the DIY mecca that I don't particularly like but also choose to spend copious amounts of moolah at, we were stocked up on 6" x 6" PT lumber and road base. I scrounged up some rebar from the other project we're working on right now, and we were good to go with our retaining wall.

We dove straight in to installing the wall - this area was actually dug out right at the beginning of this project. 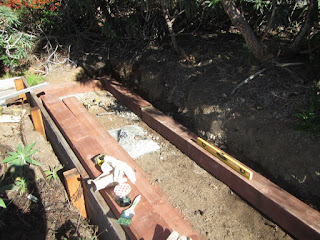 This is a bit later on. The wall was constructed in exactly the same way as the one at the bottom of the hill. We actually had to stop because we ran out of lumber. 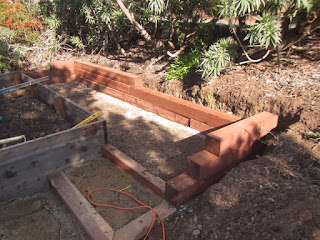 Instead of heading out to pick up more lumber, we decided to move on to installing the irrigation pipe. I marked out the locations of the pipe with my new bright orange ground-marking paint, so that Amy Sheep would know where to dig. 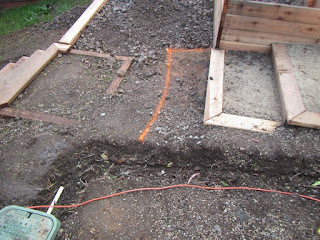 We dug our trenches with a combination of the jackhammer and a trenching spade. The spade is only about four (4) inches wide, so it cuts a narrow trench; I had Amy dig down to about eight (8) inches below grade. 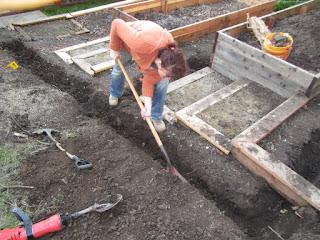 The pipe which serves the upper raised bed had to go under the stairs; we planned for this which is why we haven't installed all of the decomposed granite yet. 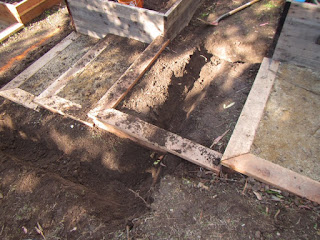 I was a lot colder than it looks in this photo... 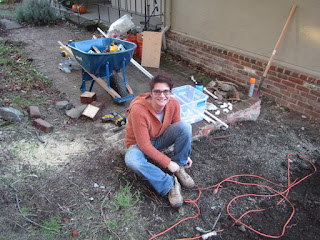 By the end of the day we had our first (and longest) PVC pipe installed in the trench. We had to down tools at this point because it was getting dark. 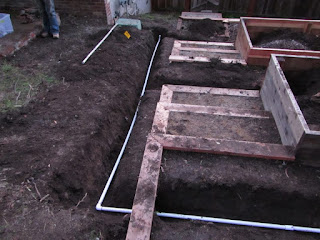 The next morning happen to be Sunday, so after our customary lie-in and a quick piece of toast we hit you-know-where to pick up some more 6" x 6" lumber and swung by American Soil & Stone for our first batch of topsoil. Once back at the ranch I had Amy finish up the retaining wall quick smart. 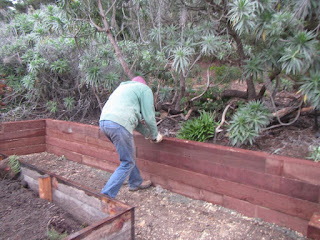 Not too bad! The area between the wall and the raised bed will be getting the decomposed granite treatment before too much longer. 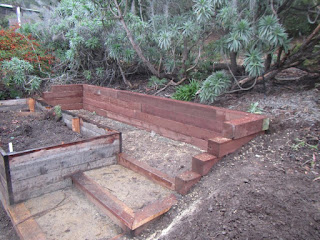 This is a bit later on after we installed the other two irrigation lines. We haven't quite figured out the valve box set up yet, so for now the pipes terminate close by. 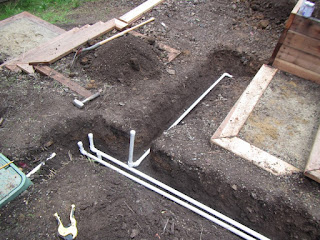 We also left plenty of excess pipe at each of the beds. 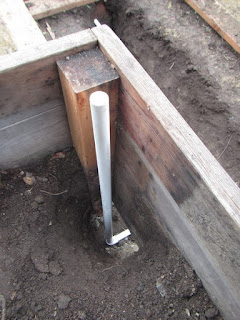 It was a lot easier filling in the trenches than it was digging them. 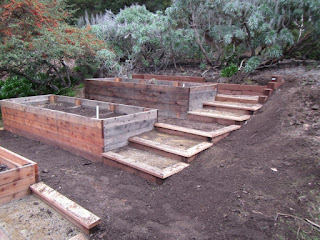 This section was left open for now. 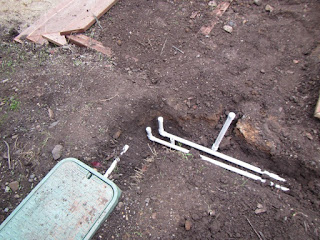 We finished up by tossing twenty cubic feet/ten bags of topsoil into the middle bed. We would have picked up more, but the van was partially filled with 6" x 6" lumber at the time. 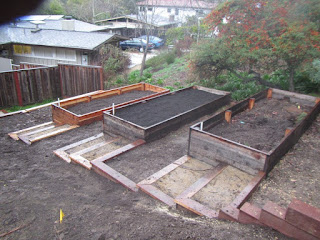