I wrote last Summer the Summer before the one that just finished (!) about how Sam got his first proper bike, and how that reminded me of the day I got my first proper guitar. That post developed into a history lesson on the first three (3) guitars I owned. At the time I thought it might be interesting to write about some of the other guitars (and basses) in my collection. This idea got as far as having Samuel Sheep take photos of each guitar with his flashy XLR camera....and no further. Well, until now!

So, first a recap: the first guitar I got my hands on was my father's Levin. This was followed by the all-white low-budget Marlin Slammer at the beginning of 1987, and then the Japan-built metallic-blue Fender Stratocaster almost a year later. Two of these guitars remain in my family today, and all three were documented here. 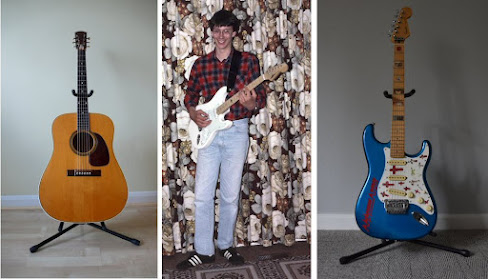 (4) Rickenbacker 1997PT 1987/88
The next guitar probably deserves its own blog entry. I'll post a link here if it ever gets one. So, let me start off by saying that I loved the blue Strat, but the guitar I really wanted was a Rickenbacker. I was a Beatles fanatic at the time, and I wanted the Beatle guitar sound.
In 1987, Rickenbacker released a Pete Townshend Limited Edition Rickenbacker model 1997PT guitar, based on the six-string Rose Morris Co., LTD, Rickenbacker 1998 model Pete used extensively in 1965 and 1966. This reissue was limited to 250 guitars. The guitar has a red sunburst finish, three "toaster" pickups, two-piece staggered "Pete Townshend" pickguard, one original style f-hole and original style knobs and tuners. The fretboard is dot-inlaid rosewood over a double truss-rod through-body neck. The serial# is stamped on the input jack plate. One thing about this guitar that's not ideal is the replica "R" tailpiece, which makes it difficult to get the guitar in tune.
It took me over a year to save enough $$$ to buy this guitar - my first professional instrument - and I had two gardening jobs and a paper round at the time. I was lucky that Rockbottom in Croydon still had two of these guitars to choose from at the end of 1988. The grain pattern ont'  tother 'un was somewhat inferior as my Grandfather would not have said. The retail price was UKP 895, and I had to find another 65 quid for a custom Rickenbacker case. If you're still reading this, you might be wondering why I didn't get a Lennon-style Rickenbacker. The answer is that those ones didn't come out until 1990, and I was in recovery from my Beatles obsession by then. Not to mention broke! 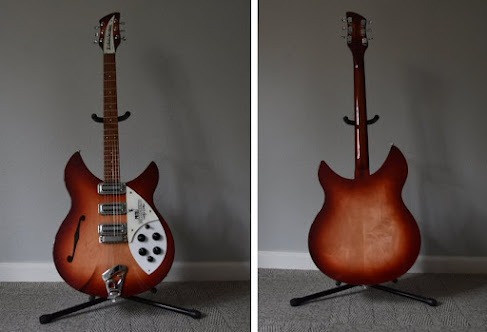 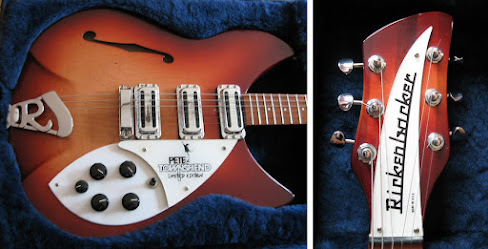 Charvel began in the early 80's as a California based company that, through a link-up with Jackson, produced guitars in Japan from 1986 to 1996. It is only the first six years of that production run that are remembered with any fondness however.

I acquired this guitar used in (I think) early 1993 from a friend for 200 quid. He let me pay in installments. I was going to use it to learn how to play like EVH. I didn't get very far, which is a shame because this guitar has the perfect low-action set up and ultra-flat neck for double tapping.

I've always looked down on this guitar as a poor man's Jackson, even though it plays really well. I've recently discovered that Charvels from this era are actually quite sought after. Maybe not as much as the American Charvels from the very early 80's, but still worth a few $$$ to the right people. In truth, this guitar has hardly even been out of its case since I brought it to the States (see below). 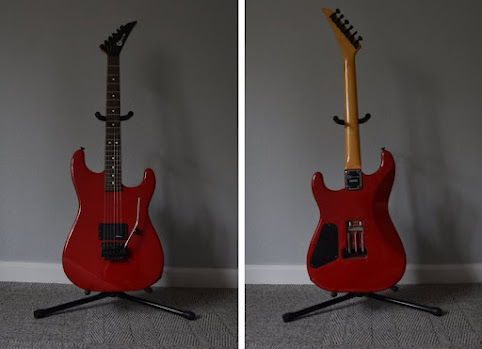 Maison was a relatively short-lived South Korean company which made budget copies of well-known guitars and basses. Very little is known about production dates and numbers, and I am not even 100% sure I have the model number correct.

I bought this bass used from Rockbottom in Croydon one lunchtime in late '93 or early '94. I wanted to learn bass, and maybe get into a punk band. I basically asked one of the guys at Rockbottom what they had that was cheap and the Maison was what they came up with. I think I paid about 150 quid for it. I played it through my Fender Reverb 35 watt guitar amp. This is a really good beginners instrument, a lot better than the price tag implies. This bass had a rebirth in 2007 after I brought it to America, as shown in the third photo, but it has rarely seen the light of day since then. 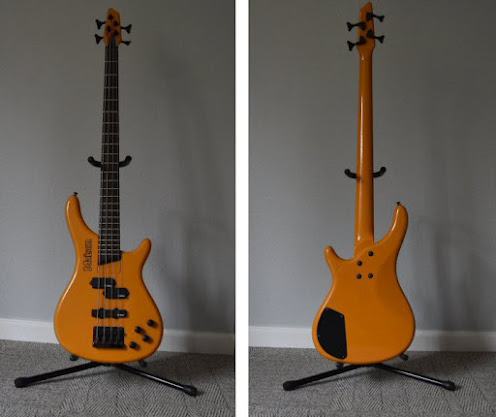 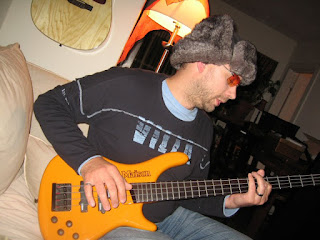 I moved to Manchester in spring 1995. It seemed like a long way from the old homestead back then. Only the blue Strat made the trip. The Charvel, the Rickenbacker and the Maison bass, all of which I still own, were consigned to a South London closet. After playing the Strat without an amp for over a year, I decided I needed a decent, but still affordable acoustic guitar. After a false start with a cheap Fender acoustic, I found the Washburn at A1 Music one Saturday morning in 1996. (A1 Music used to be at 88 Oxford Road in Manchester next to the Salisbury pub and across the street from Jilly's Rockworld, all of which was emitting an agonizing death rattle at the time).

This guitar remains the most played instrument in my collection. It was my main instrument since it was bought until it was essentially retired in 2016. I think it cost around UKP 250, and for that I got a really nice and very playable guitar. The D11-N has a beautiful natural-finished book matched mountain ash top, back and sides for an exceptional tone and unusual appearance. The neck is mahogany with a rosewood fretboard. One of the original chrome grover tuners broke, and for years I had a mismatched tuning peg. A couple of year ago I forked out for a replacement set of gold plated grovers. They are very similar, but I had to drill some extra holes in the back of the peghead. 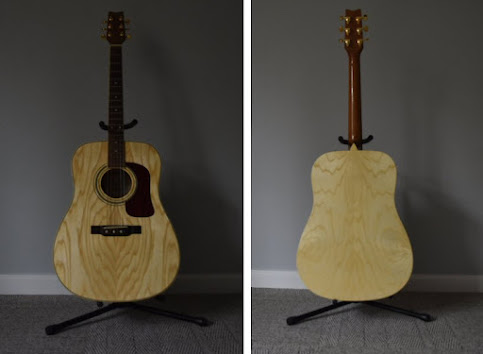 (7a) Ovation acoustic
When I moved to America at the end of 2004, I took two bags and no guitars. I planned to pick up a suitable instrument somewhere along the way, but it was over a year before I got around to it. At the time I had a sort-of friend of convenience called Chairman Tinfoil who happened to own a teeny-tiny guitar shop. The shop was in a strip mall in the Tri Valley Area and was called something bland like Tri Valley Music. They used to advertise in the Yellow Pages in all three nearby cities long after most businesses abandoned print media. For all I know, they still do.
Anyway, I talked to the Tinfoil Man about buying a guitar that would bridge the gap between nothing and whenever I could import the Washburn. He fended off my attempts to actually buy a guitar, and instead lent me a rather nice Ovation acoustic. The Ovation was a beautifully crafted guitar, but the tone was nothing like the Washburn, and I didn't really like it. I've always thought the molded plastic Ovation body looked like something Argos would sell. I kept looking for the "Made in Taiwan" sticker! I actually only had possession of this guitar for a few weeks before it was recalled. I only have a few pics to prove it existed, none of which show the full guitar, so I'm not sure what model or year it is. 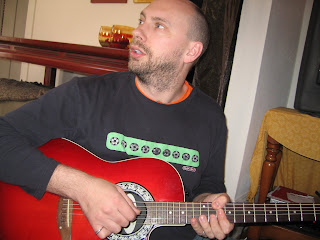 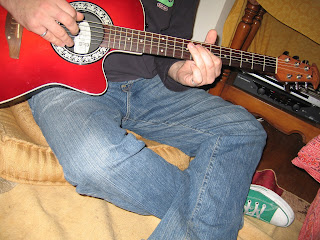 I forget why exactly I had to return the Ovation - maybe it was too nice to be out on loan - but in its place Chairmen Tinfoil lent me an almost-new USA-made Telecaster. The Tele was made in about 2002; it was actually owned by Mrs. Chairman Tinfoil, although she didn't play guitar. The Tele, in spite of being a nice instrument, wasn't really what I was looking for - I was a confirmed acoustic player at this point, with little interest in leaning new riffs or strumming on an solid body electric guitar without an amp (again...). The Tele spent most of its time in my possession in its case. 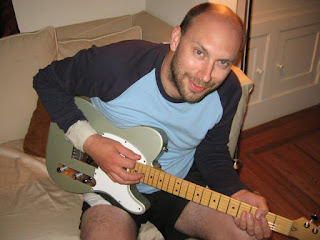 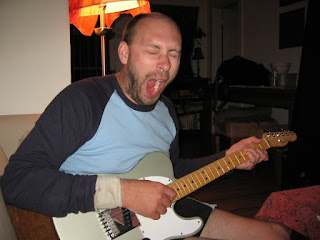 (7c) Washburn D11-N acoustic 1996
In the Spring of 2006, I made a trip to the mother land and returned with the Washburn which instantaneously re-established its position as my primary instrument. The Telecaster was shunted back to Tinfoil land, never to be spoken of again. 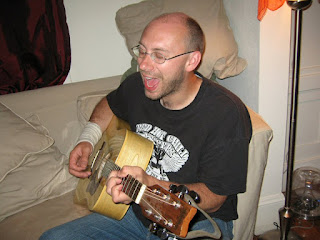