Installing the replacement transmission was a fight, but it was definitely one that was worth winning. Just getting the tranny into roughly the right place under the car was hard enough. I ended up tying it to a scrap piece of 2" x 8" lumber so I had something flat to lift with the floor jack. 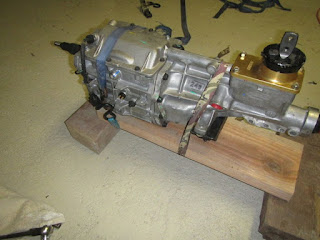 After much wiggling and wrangling, I was able get the transmission to within a quarter of an inch from where it was supposed to be - I just could not get it to slide all the way in (!) close the gap to the bell housing: 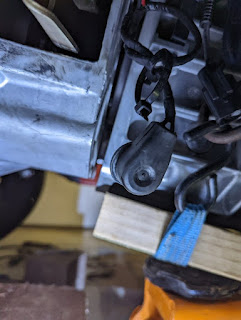 Eventually, after much pushing, pulling, swearing and banging my head on various bits of the car, I broke the golden rule and used the bolts to bring the transmission into it's final position. I was careful to tighten the bolts gradually, and keep rotating from one to the next. This process was very successful - there was basically no resistance to installing the bolts. But, all in all, it took most of a day to accomplish this operation.
The next weekend I re-installed the driveshaft and the park brake cables and adjusted the clutch. After that I put the car back on the floor and, with the transmission level, filled it up with ATF. Hopefully this will prevent future seizures. With that done, I test drove the car 10 feet out onto the driveway. Even after sitting for the best part of a year the engine started up right away! 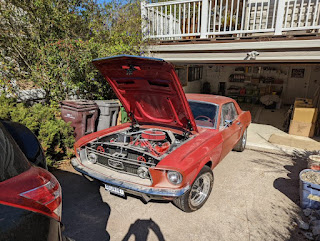 I flushed the radiator/cooling system while I had the car outside, and then I tested reverse gear by returning it to the garage. I am planning to take the 68 to a show at Hayward Airport next weekend. Before that, I have some very serious cleaning to do. 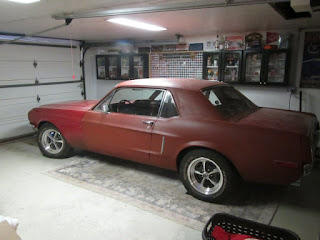