Two weekends ago, or a fortnight in Ye Olde English, The Amy Sheep and myself removed a thirty (30) foot tree from the spot where we want to build our new shed. What we left was the stump, and as longer term followers of this blog might recall, we've dealt with one of those before.
This time round we didn't want to rent the big stump grinder: it would be very difficult to get it down the slope to where we need it, and we don't have the budget for this project - the last stump was five feet in diameter, so we didn't have a choice with that one.
Plan A was to rent a smaller stump grinder for considerably less wonga. This didn't go to well sadly: the stump grinder was pitifully weak and the motor kept cutting out. After messing about with it for half an hour I bailed and returned it. The motor issue was a convenient excuse to get my $$$ back frankly.

Onto plan B, which was a star wedge and the BFH. This plan lasted about 29 minutes less than plan A. 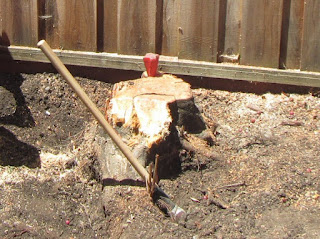 Plan C was for Amy Sheep to dig out the stump.....this went the same way as Plans A and B, but it did clear the path for Plan D. 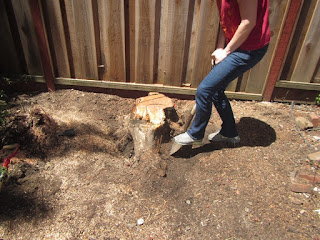 And Plan D was the chainsaw.... 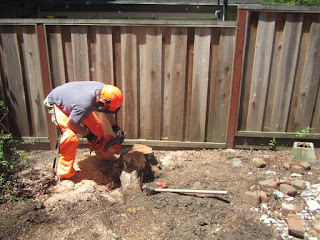 We were definitely onto something this time.... 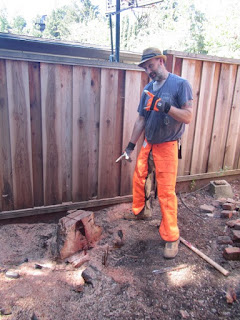 This plan was carried out in full: 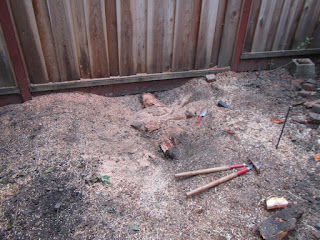 The stump was our last obstacle to world domination what will be our new tool shed. But, before we can build the shed, we need a level playing field. Or at least a level pad slightly bigger than the shed's 8' x 4' footprint. The ground in this area is drops about five (5) inches from the right rear to front left. We used some 6" x 4" "pressure treated" (PT) timber to build a retaining barrier for the foundation. This is timber that has been treated with wood-preserving chemicals under high pressure, and is thus highly resistant to fungus, termites etc. This is important for any timber which is in contact with the ground.
The first piece was installed level, and parallel to the fence - getting it level took a little bit of back-and-forth. I anchored the timber with several two foot pieces of 1/2 inch diameter rebar which were deployed with the BFH: 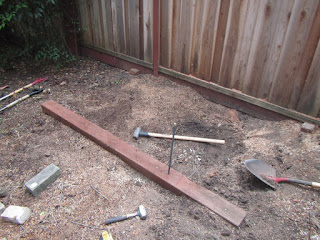 The holes were drilled with this tasty bit of kit: 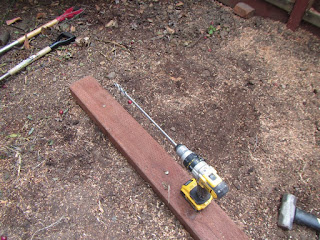 A second retaining barrier was added at the low side... 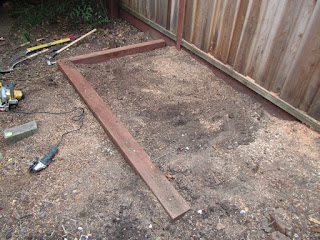 And then we laid down some base rock - or road base, as it's known some parts of the country. This is material that varies in size from half inch diameter down to sand and is very easy to compact. 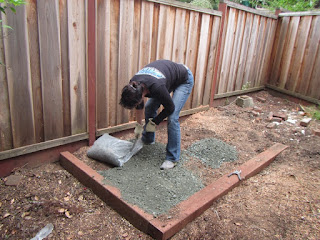 We tried to rent a compactor, but we couldn't find one locally, so I had Amy Sheep do it instead with a scrap of 4" x 6" lumber. After that we had to cash out our chips for the day. 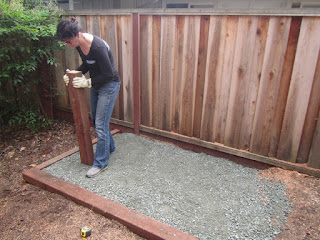 The next morning, after a quick trip to pick up more base rock, we set about leveling out the pad. 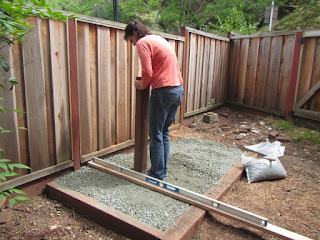 The next step was to cut and install the skids that the shed will stand on. The skids were cut from 8' lengths of 4" x 4" PT, and we used all six pieces although five would probably have been enough. 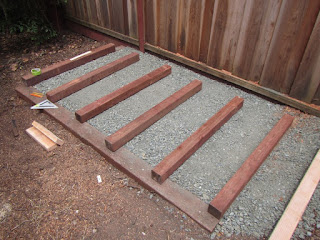 The first skid stands on top of the retaining barrier, so it was easy to get that one level, and then we worked across the pad. 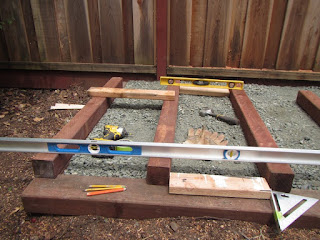 I cut some spacer blocks from a scrap of 2" x 4" lumber, so it was easy to get the skids parallel, and then I tacked them in place once each skid was leveled out. 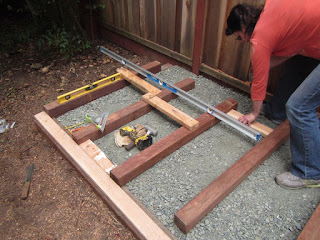 This is the finished foundation pad with the front and rear rim joists installed. I used the fancy GRK screws to set the lumber in place, and then made sure the structure was square before I shot in more nails than were strictly necessary with cordless dewalt. 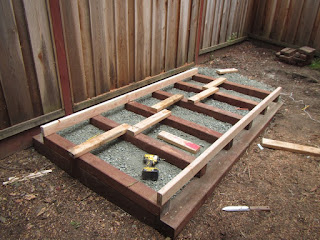 We framed out the floor next - we used 2" x 4" doug fir for the floor framing. Normally 2" x 6" is required for flooring, and that's what I used on my last shed, but this is tiny by comparison and we can save two inches on the overall height this way. We stapled on some fine mesh screens in the spaces between the skids - we want plenty of airflow below the shed but hope to exclude non-airbourne matter. 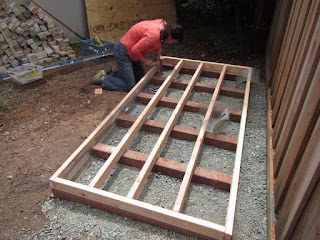 The floor is a sheet of 3/4 inch plywood which was nailed on good an' proper and gives us a very solid base on which to construct the shed. One major advantage of the 8' x 4' footprint is that a lot of the materials can be installed without any cutting. 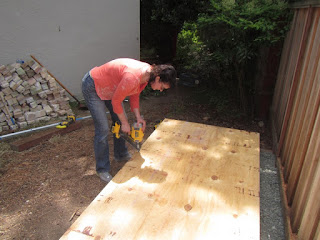 After all that, was it level - well, yeah, it pretty much was, thanks for asking. 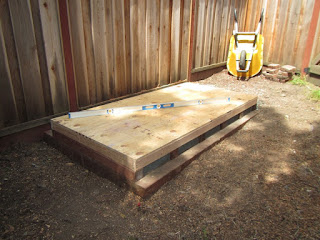 There was bit of Sunday afternoon left over so we cleaned up the yard of leftover bits of cherry tree... 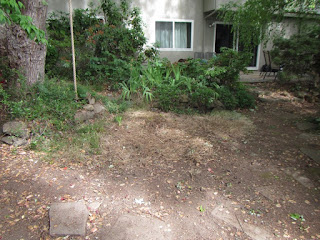 ...and converted this pile of de-limbed branches.... 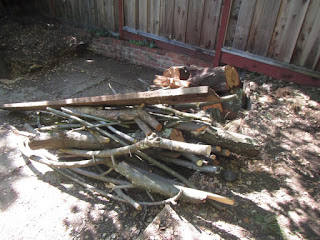 ...into a pile of firewood - the bigger pieces will need a couple of years to dry out before we can burn them, although it will be closer to five years before we need to given our incredibly low consumption rate. It's actually more important to me to look out of my kitchen window and see neatly chopped firewood than it is to actually burn it. 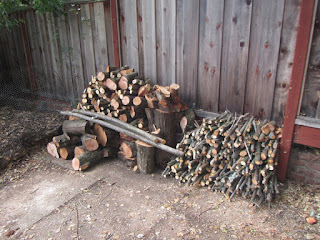