More on the Garage

Apart from my post about the tree that we chopped down on Saturday, it's been a couple of weeks since my last post and in "normal times" it would probably be a couple more before the next one. The last two weeks have been the closest to the old normal since the beginning of the Shelter-In-Place order: traffic is back on the roads again, most of the big box stores are open in an amended form, and my business is back to about 75% percent capacity.

As a result, I haven't had as much DIY time as I have become accustomed to, but I have still been chipping away, and I have plenty more to blog about. I have to say that the garage looked one thousand percent better with it's sparkly new floor....but it made the walls and ceiling look very tired. Having already gone to the trouble of completely emptying the garage, it felt like now was the best time the only time I would ever bother to re-paint.

I used the same Benjamin Moore white dove paint we've used for all the ceilings in the house, but this time I used semi-gloss instead of flat; I'm hoping it will be easier to wipe down, if I ever do any wiping down....The walls came out very nice - I put on a thick layer of paint, and I only needed one coat. I also had help from Amy Sheep and Ruby Sheep with the ceiling. 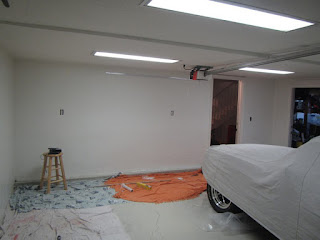 Now then, now then....the garage door looked awful. You can really see how how awful in the next photo which was taken after I painted the top panel: 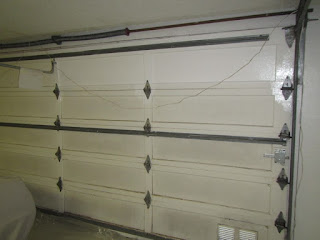 A friend from BAMA calls this process "chasing ugly." You fix the worst bit, and then the next bit looks bad, so you just end up chasing the "ugly" all around the car garage. Fortunately, once the door was done, there wasn't anything else to paint...and ugly was no more. 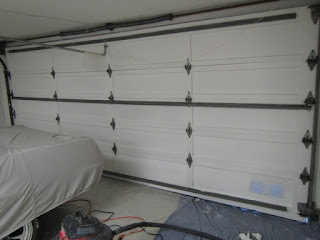 I mentioned earlier on that my work bench was too big to fit through the door between the garage and the basement. I had to take it around the side of the garage and park it in the backyard. This is the same bench that I built in about 2008 - well it's half of it actually, the other half is installed in the workshop. 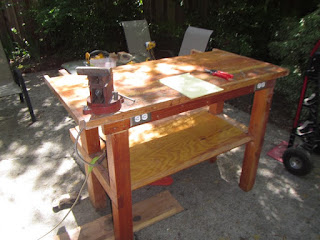 This bench was originally built with a tool-well at the back which increased the depth by about a foot and made it more difficult to reach across the bench...and became a place for storing crap; I certainly never put any tools in it. I decided I would rather have an extra foot of width in the garage which may be important when I get my next Mustang. 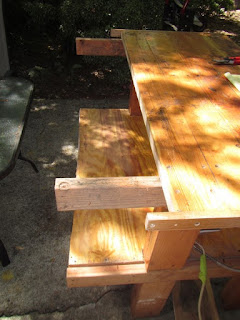 I trimmed the bench down a couple of weeks ago when I had twenty minutes to spare and the sun was out: 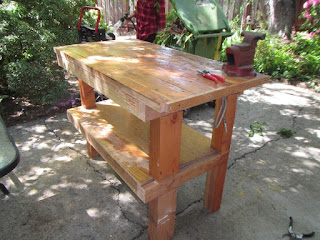 Back in the garage, and I had to make some shims in order to level the bench, and then I bolted it to the wall. Now it won't tip over the next time we have an earthquake. 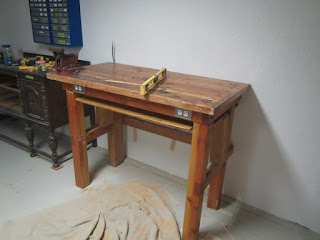 Filled the garage back up.... 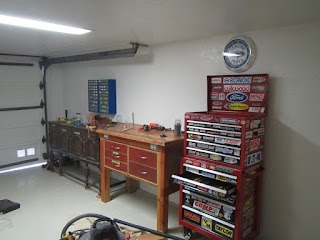 This is how my over-bench shelf used to look. Obviously it was too ugly to stay like that... 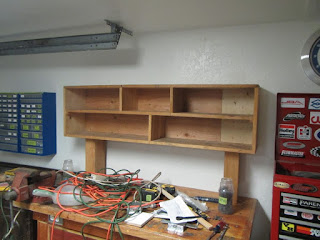 ....so I chased it into a confrontation with some black paint: 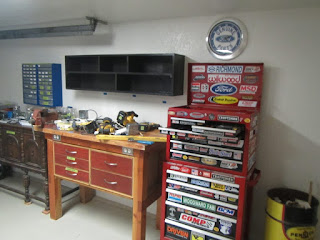