This project feels like it has taken as long as the driveway.....while the outdoors works were going on I was slowly chipping away at the decorating project, in between watching the World Cup and being down with Covid. Last time around I was finishing up the repairs to the walls in the bedroom and bathroom. When that was done, I installed the mounting bracket for the new lighting fixture. The paint color was still undecided at this point. 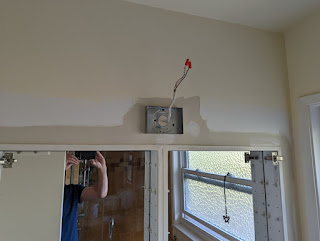 Onto the vanity. The dated granite countertop had to go - we will be replacing it with something modern and keeping the sink and vanity unit. 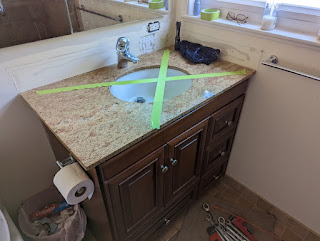 Disconnecting the sink was a bit of a saga. The first problem was the shutoff valve at the hot line which was inoperable. I had to shutoff the entire water supply before I could remove the old valve, and when I did that I made another discovery. While the supply lines in the house are all copper, galvanized steel nipples have been installed between the copper pipe and the shutoff valves. Obviously galvanized steel pipe is prone to corrosion, and this is accelerated at the hot water side. In this case the end of the nipple was so bad that there was nothing left to thread onto. I had to make some immediate repairs with whatever I had on hand before I could turn the water back on and run to the hardware store. 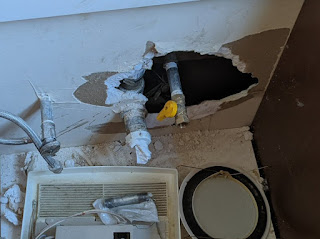 This is later, after I changed out both nipples and both shutoff valves. I didn't bother making full-on repairs to the wall because it will be hidden inside the cabinet. This area will get painted at the same time as the bathroom walls. 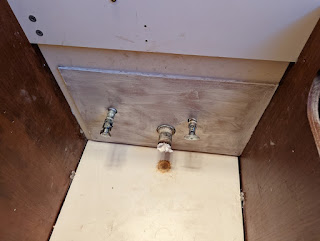 Moved back into the bedroom. We made some modifications to the closet when we first moved in - basically we moved the clothes rail up and installed a second rail below. I never got around to making any repairs to the walls....until now. The day after we emptied out the room, I started feeling unwell... 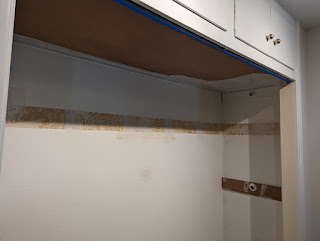 This is about a week later. I carried on painting even through I had covid, but the production rate took a serious hit. 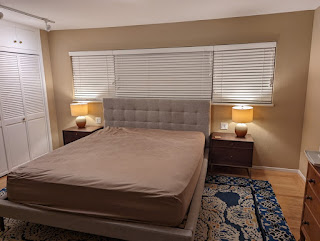 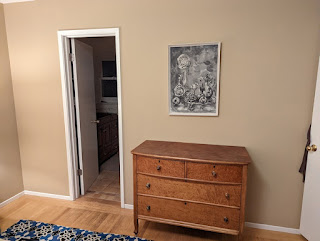 This is a number of weeks later after the new countertop has been installed in the bathroom (by professionals) and the plumbing reconnected (by me). This was done about fifteen minutes before we left for our Christmas vacation. 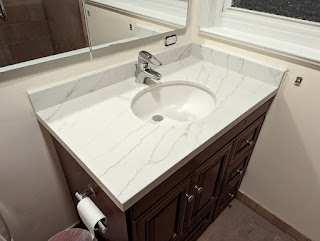 After the New Year I didn't feel much like painting the bathroom, but eventually I got it done, and installed the new lighting fixture. It came out nice: 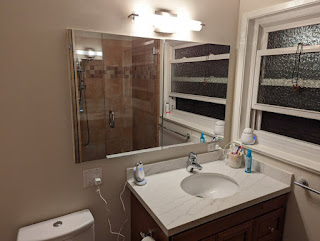