The last post ended with a little bit of false advertising, something I learned from Amy Sheep. Instead of addressing the Great Dumpster Conundrum this post is a round up of what we've been doing in between digging and pouring sections of the floor.

I few weeks ago (in blog time!) I built a storage platform which by now has been fitted with an old piece of carpet and partially filled up. 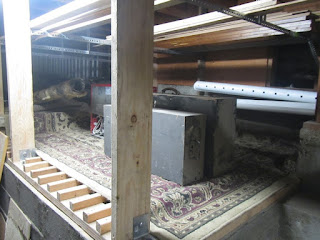 I have also constructed my rack for storing large pieces of lumber above the platform. 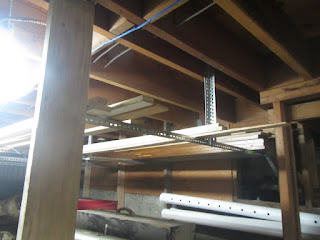 And the shelves at the front of the basement have been mostly refilled: 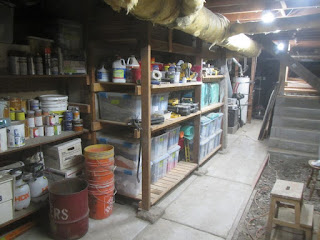 Which brings us to the area just beyond the storage platform/timber rack. Clearly this area needs some attention: 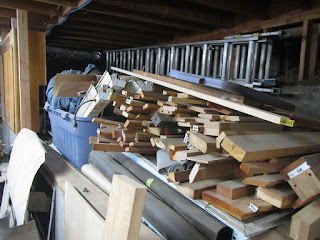 I want build another storage platform in this area, but, because of the slope, it will have to be several inches higher than the original platform. I used the laser level to figure out exactly how much higher - I don't want to remove any dirt below the existing foundation. 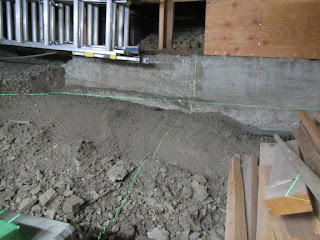 After scraping away some more dirt (and dumping it in the over-full front yard), I was able to install a timber form and pour a level strip of concrete against the foundation which is about six inches wide. 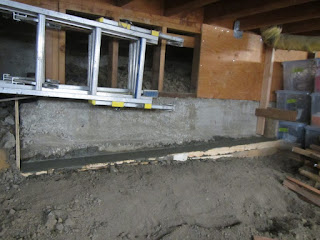 While the concrete was curing I installed more timber bracing between the cinder block wall and the floor joists. I am hoping this will stabilize the wall over the next several years because I do not want to have to rebuild it 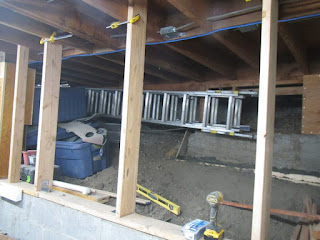 When that was done, I set up the laser level and tuned it to the top edge of the concrete strip. The line that is cast onto the braces enables me to easily install a timber rail which is level with the concrete. 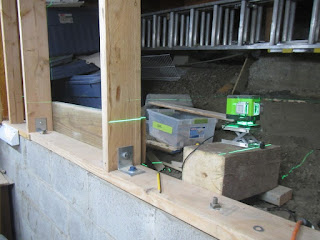 Eventually timber slats, maybe a carpet, and definitely a pile of junk will be installed instead of the spirit level. 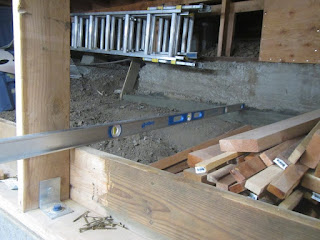 Stay tuned for the Great Dumpster Conundrum - yes, we really mean it this time!
at January 05, 2022