Cassettes* are fashionable again! Yep, all the retro-chic kids have passed on the vinyl rebirth and now Sony Walkman's are highly collectible! I mean, who could forget that scene in the first Back to the Future movie? 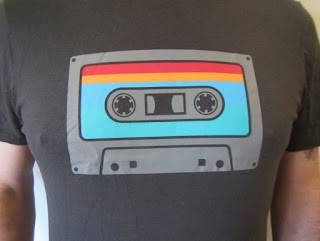 I never really bought cassettes myself - If I liked a record, I bought the vinyl, almost always a second hand copy actually. But I certainly made my share of copied tapes. Oh yes. And I can still remember the logo on the inner sleeve of a lot of vinyl records that came out in the early 80's. 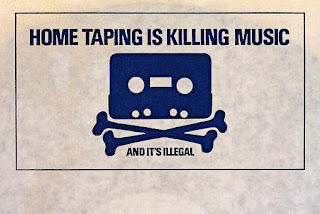 Years before I cared a fig about music, I was aware that my Dad had a shed-load of copied cassettes. His good friend Ron Tent used to record them from vinyl, or occasionally he'd make his own if he liked the record enough to buy it. My Dad had an impressive "separates" Hi-Fi system that could fill a blog post on it's own. In later years I used it to make my own tapes and eventually we even had a tape-to-tape set up!

There were a number of cassettes in his collection that became legendary. For a start there was the copy of "Songs in The Key Of Life" that was kept in the car and was played so much it wore out. You know the baby crying at the beginning of that record? That's how I used to feel each time that tape was slipped into the pull-out under-dash cassette player. That album used to make me feel travel sick. I'm not kidding! When our car was ransacked by joyriders in the mid-80's, they left that tape behind...

Then there were the favored few tapes that got a regular airing at the barbecues my family would host from time to time. One of them was the "War of the Worlds" soundtrack, and another one was called something like "Midnight Express." These were both tapes Ron Tent had made. At the end of the Midnight Express tape were a few unrelated bits of music. The final piece was labelled "Pink Floyd The Wall" in Ron's blue biro. I loved this particular bit of music when I was a kid. My Dad said that Ron had recorded it from one of his son Phil's records.

I have lot to thank "Big" Phil Tent for actually, and I don't mean musically. Because he was a fair bit older than me, I used to get quite a few of "Big" Phil's cast offs. This was the era when you didn't throw anything away if you could give it to someone else; before the 1980's when everything was injection molded in Taiwanese plastic. One time, after "Big" Phil had had a clear out, I came by a stack of old board games. I like to think they were passed to my Dad in the City House canteen. Whatever the reality, this is how I came to own original 70's versions of Kerplunk! and Spirograph. And a couple of other ones I don't remember as well.

I can't actually ever remember meeting "Big" Phil Tent. We visited Ron Tent's apartment in Dulwich a number of times, but "Big" Phil had moved out by then. I did spend many hours playing with his old games though. Years later, when I listened back to the Midnight Express cassette, I discovered the music at the end was actually "Shine on you Crazy Diamond" and most of "Have A Cigar." At least Ron got the band right. Or maybe "Big" Phil was a bit careless about keeping his records in the correct sleeves? Personally I can't see it being the latter, because his Spirograph set was 100% complete including the thumb tacks!