I have been tinkering with a display case that a friend gave me, on and off, since Day #33 of the fireplace remodel, even though it has nothing to do with that project. At the time I got it, I needed another project like a hole in the head, but the cabinet was free and it had real potential. This is pretty much what it looked like after I got it back to the workshop and tore off the original base: 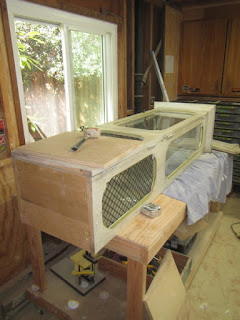 After some reconstruction, the cabinet was sanded and panited with primer/stain blocker... 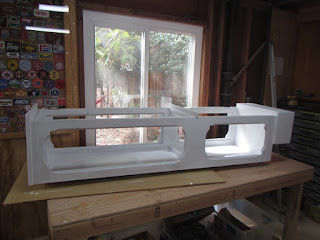 And it was last seen in this blog after I painted the accents white, and then the cabinet black: 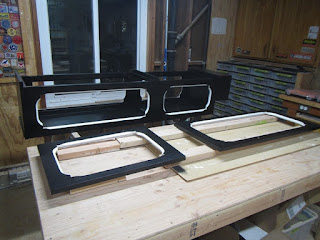 The intersections of black and white paint didn't come out quite as sharp as I wanted them to, so I had to do a bit of touch-up with the white paint and one of Ruby Sheep's small brushes in order to get the result I was after. 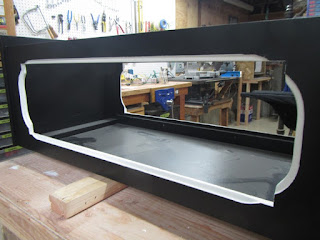 When that was all properly dry, I applied some bright red sign-writing paint to the radiused parts of the accents - I tried using masking tape, but it wasn't very successful, so I actually painted the red on freehand. I stared on the side of the cabinet that will go against the garage wall; the second side and the doors came out better after this practice run.

The red paint took 48 hours to properly cure and after sitting in the 'shop for this time I discovered that the black paint has an electrostatic attraction to fine dust: there was fine dust was on every surface of the cabinet and it was just as thick on the down-facing sections. This doesn't bode well for anything that's going to be sitting in a corner of my garage, and the dust wasn't easy to get off. My solution was to wipe the cabinet down with distilled water and then slap on two (2) coats of some quick-drying varnish. The next photo was the result, and both the cabinet doors got the same treatment. 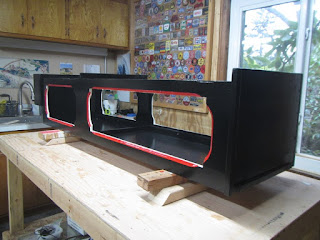 This is how the upper section of the display case looks with the mirror in situ. The mirror is only held in place by the glass shelves, which go in last. 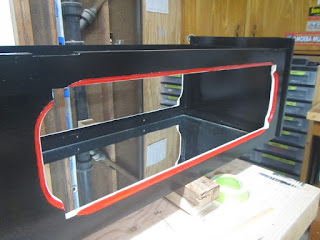 I didn't like the relative instability of this arrangement, ao I crafted a trim piece from a scrap of old baseboard and installed it over the top edge of the mirror (after painting and varnishing it, naturally). 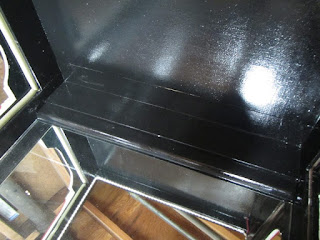 Time to re-install the glass panels! The lower panels were originally fitted with some diamond-pattern mesh. Honestly, it belongs inside the box that also contains Adam Ant and those two idiots out of Bros. 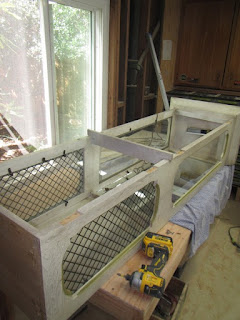 Much better without it!  I had to modify the fasteners which secure the glass panels to accommodate the reduced thickness. 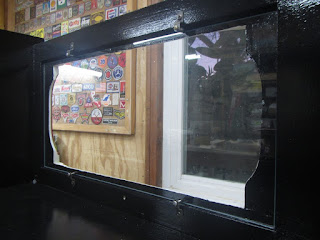 The larger panels are held in with rubber inserts which are not exactly color coordinated, but whatever... 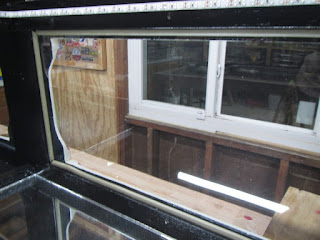 The original cabinet came with the crappy lighting fixture shown below in the top cabinet...this was last seen in tut 'shop bin along wit sithers. 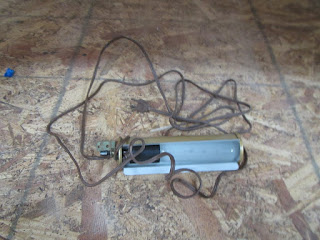 I had something a bit more modern in mind: LED tape lighting. 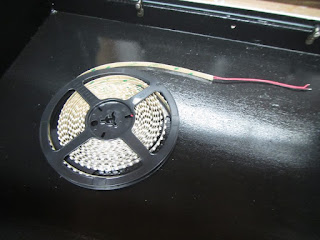 I've seen quite a bit of this at work lately, particular under kitchen cabinets, although not in this color, I must admit. I'm a novice to LED lights, but I did my usual research on tut interwebs, and it's pretty easy to install and connect. The wiring can be done with crimp-on connectors, but I soldered mine and used some heat shrink tubing to make it look super professional. I bought a sixteen foot reel of LED single color tape with 36 LED's per foot and some connecters online for about $50. I had an old 12 Volt power supply kicking around so I didn't have to buy one of those. I already had the paint and other materials on hand, and the cabinet was free, so if my time is worth $50 and hour, my total investment is still less than $7,000.

The lighting was installed in two loops around the front of each cabinet. 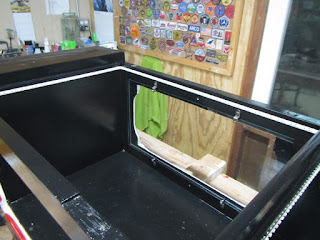 The upper loop reflects off the mirror which doubles the effect. 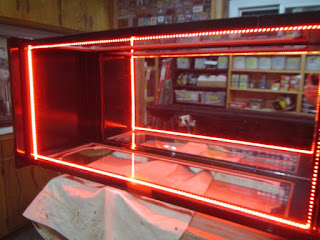 Once the lighting was all buttoned up, I re-installed both the cabinet doors and the rest of the hardware and moved the display case into the basement.* 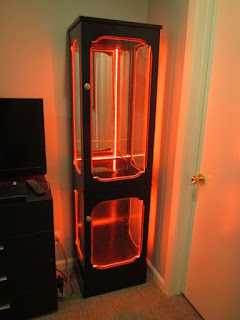 Looks even better with the basement light off: 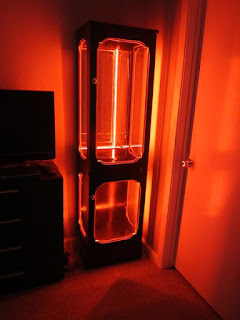 (*The display case is destined to be installed in the garage/man cave, but right now that area is the subject of another project.....stay tuned to find out more!)