What a strange time this is....I mean it really is! Over dinner the other night I told the three junior Sheep that all kids are entitled to one (1) totally unexpected disruption to school - due to an unimaginable catastrophic event - and that Covid-19 was theirs. They weren't exactly overjoyed by this news - the reality of nearly six weeks of home school has bitten down on all of us at this point - but they did say, pretty much in unison: "We know what yours was."

The following events took place in (I think) Spring of 1978, and while they are memorable enough, they had not passed through my mind in probably twenty-five years until one day when I was driving Samuel Sheep to school. We lived in the white house at the time (as Sam called it), so this would have been around 2012-2013. (Note: one thing about constantly moving house every one or two years is that you can date anything in the past if you can remember where you were living when it happened).

Anyway, one day in the car, Sam was asking me to tell him stories about my own school days. He had a thing about hearing old stories at the time. At first I couldn't think of anything; then I said, "Well, did I ever tell you about the time Vincent Prodigy burned down the school?" To say he loved hearing that particular story would be an understatement; I had to tell it every morning for weeks afterwards. At this point all the kids have heard it and could probably write their own versions. Here's mine, as I remember it....

I went to what was then called Ridgeway Infants School for kids aged 5-7, in leafy Sanderstead. We drove by it about four years ago when the Sheep family was vacationing at the old 'stead, and it's still there...although they built a housing estate on the playing field.... 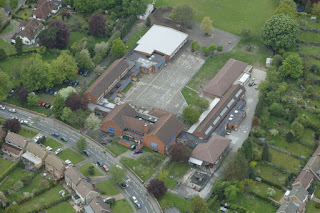 On this particular day, we had been outside for morning recess and were all lined up outside the classroom door waiting for out teacher, Mrs Earwig*, to slope back from the staff coffee room/opium den. By the time she arrived, wisps of smoke were rising from under the door; a quick check inside apparently confirmed the whole room was ablaze, although I was too far back in the line to see for myself. In some embellished versions of this story, the teacher ripped off her left stiletto and used it to smash the fire alarm glass; what is certain is that the alarm was well and truly raised and the entire school population was herded out to the yard.

I can remember standing around in the yard for an absolute lifetime while an entire battalion of firemen trooped into the school to deal with the inferno. All the firemen were wearing thick, bright yellow over-trousers that made them look like weebles and clearly made walking in a straight line uncomfortable; this was 1978 so they didn't have firewomen back then and clearly they also didn't have anyone advising them on how to look professional. Or walk straight. Fortunately, they had been taught how to put out fires, and they did so in spite of their dress.

Eventually, long after lunchtime had passed, my group was moved to the school assembly/dining hall where I was informed that a telephone call to my home had gone unanswered, and I had better make my way back to the yard and await further instructions. As I meandered back outdoors, I watched several friends get picked up. Then, as luck would have it, I ran into my next door neighbor and her Mom who offered me a ride home. I assume the school were notified, but I don't recall that bit at all.

When we got back to the ranch my Mom was still AWOL so I went next door to hang out until she deemed to show up. Being off school legitimately without being ill was great. I guess eventually Mom came and collected me, otherwise I'd still be there now.

School was open again the following morning, but our classroom had been gutted by the fire. They set up tables for us in the school dining hall, and then we moved to a portacabin after a while; I had moved up a grade or two before that part of the school was rebuilt. I found out that Vincent Prodigy had taken matches to school and that he set fire to the library corner right before recess. My Mom said he did it because his parents didn't give him enough attention. She also said that Vincent had been sent to a "Special School." I didn't know what a Special School was, but I was f$%&ing certain I didn't want to go to one. I wondered if every kid who was sent there was an arsonist or if you could be sent to a special school for forgetting your PE kit?

Whatever the reason he did it, none of us ever saw Vincent Prodigy again. One of the girls in my class said that he burnt to death in the fire. I thought that was unlikely because it wasn't mentioned in the brief report in the Croydon Advertiser that my Mom clipped out of the paper. Someone else said that his family moved away, but I knew that was bollocks because his older brother Robert Prodigy was a year ahead of me right through junior high. What is certain is that throughout my school career I wished in vain for another fire day.